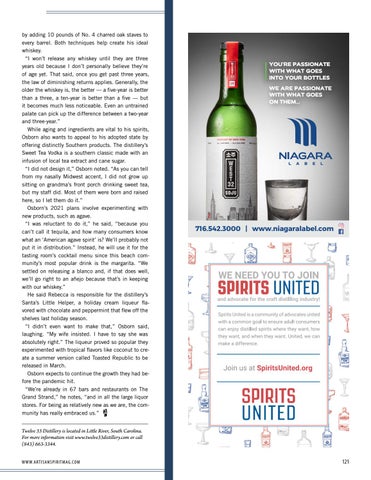 by adding 10 pounds of No. 4 charred oak staves to every barrel. Both techniques help create his ideal whiskey. “I won’t release any whiskey until they are three years old because I don’t personally believe they’re of age yet. That said, once you get past three years, the law of diminishing returns applies. Generally, the older the whiskey is, the better — a five-year is better than a three, a ten-year is better than a five — but it becomes much less noticeable. Even an untrained palate can pick up the difference between a two-year and three-year.” While aging and ingredients are vital to his spirits, Osborn also wants to appeal to his adopted state by offering distinctly Southern products. The distillery’s Sweet Tea Vodka is a southern classic made with an infusion of local tea extract and cane sugar. “I did not design it,” Osborn noted. “As you can tell from my nasally Midwest accent, I did not grow up sitting on grandma’s front porch drinking sweet tea, but my staff did. Most of them were born and raised here, so I let them do it.” Osborn’s 2021 plans involve experimenting with new products, such as agave. “I was reluctant to do it,” he said, “because you can’t call it tequila, and how many consumers know what an ‘American agave spirit’ is? We’ll probably not put it in distribution.” Instead, he will use it for the tasting room’s cocktail menu since this beach community’s most popular drink is the margarita. “We settled on releasing a blanco and, if that does well, we’ll go right to an añejo because that’s in keeping with our whiskey.” He said Rebecca is responsible for the distillery’s Santa’s Little Helper, a holiday cream liqueur flavored with chocolate and peppermint that flew off the shelves last holiday season. “I didn’t even want to make that,” Osborn said, laughing. “My wife insisted. I have to say she was absolutely right.” The liqueur proved so popular they experimented with tropical flavors like coconut to create a summer version called Toasted Republic to be released in March. Osborn expects to continue the growth they had before the pandemic hit. “We’re already in 67 bars and restaurants on The Grand Strand,” he notes, “and in all the large liquor stores. For being as relatively new as we are, the community has really embraced us.”