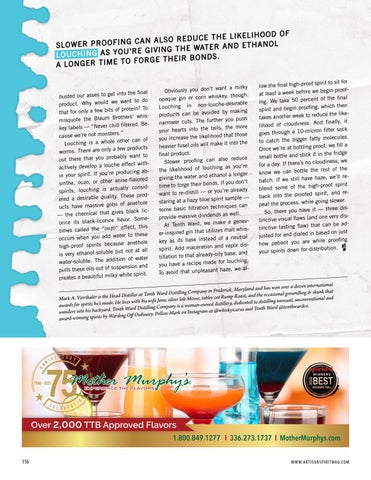 into the final busted our asses to get we want to do product. Why would of protein? To that for only a few bits Brothers’ whismisquote the Blaum ll filtered. Bekey labels — “Never chi ers.” cause we’re not monst other can of Louching is a whole a few products worms. There are only bably want to out there that you pro che effect withactively develop a lou producing abin your spirit. If you’re anise-flavored sinthe, ouzo, or other ually considspirits, louching is act y. These prodered a desirable qualit s of anethole ucts have massive gob gives black lic— the chemical that e flavor. Someorice its black-licoric effect, this times called the “ouzo” to these ter wa occurs when you add thole ane ause high-proof spirits bec but not at all is very ethanol-soluble ition of water water-soluble. The add pension and pulls these oils out of sus white spirit. creates a beautiful milky

nt a milky Obviously you don’t wa iskey, though. opaque gin or corn wh uche-desirable Louching in non-lo d by making products can be avoide ther you push narrower cuts. The fur ls, the more your hearts into the tai ood that those you increase the likelih ke it into the heavier fusel oils will ma final product. also reduce Slower proofing can as you’re ng chi the likelihood of lou anol a longer giving the water and eth ds. If you don’t time to forge their bon you’re already want to re-distill — or rit sample — staring at a hazy blue spi iques can hn some basic filtration tec nds as well. provide massive divide ke a genevAt Tenth Ward, we ma lizes malt whiser-inspired gin that uti d of a neutral key as its base instea and vapor disspirit. Add maceration ily base, and tillation to that already-o for louching. de you have a recipe ma nt haze, we alTo avoid that unpleasa

f spirit to sit for low the final high-proo we begin proofat least a week before t of the final ing. We take 50 percen g, which then spirit and begin proofin reduce the liketakes another week to And finally, it lihood of cloudiness. on filter sock goes through a 10-micr ty molecules. to catch the bigger fat proof, we fill a Once we’re at bottling it in the fridge small bottle and stick cloudiness, we for a day. If there’s no rest of the the know we can bottle haze, we’ll rebatch. If we still have h-proof spirit blend some of the hig spirit, and reback into the proofed going slower. peat the process, while — three disSo, there you have it d one very distinctive visual flaws (an t can be adtinctive tasting flaw) tha ed on just bas justed for and dialed in while proofing how patient you are tribution. your spirits down for dis