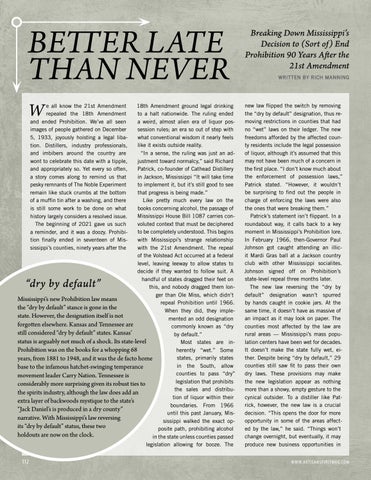 18th Amendment ground legal drinking to a halt nationwide. The ruling ended a weird, almost alien era of liquor possession rules; an era so out of step with what conventional wisdom it nearly feels like it exists outside reality. “In a sense, the ruling was just an adjustment toward normalcy,” said Richard Patrick, co-founder of Cathead Distillery in Jackson, Mississippi “It will take time to implement it, but it’s still good to see that progress is being made.” Like pretty much every law on the books concerning alcohol, the passage of Mississippi House Bill 1087 carries convoluted context that must be deciphered to be completely understood. This begins with Mississippi’s strange relationship with the 21st Amendment. The repeal of the Volstead Act occurred at a federal level, leaving leeway to allow states to decide if they wanted to follow suit. A handful of states dragged their feet on this, and nobody dragged them longer than Ole Miss, which didn’t Mississippi’s new Prohibition law means repeal Prohibition until 1966. the “dry by default” stance is gone in the When they did, they implestate. However, the designation itself is not mented an odd designation forgotten elsewhere. Kansas and Tennessee are commonly known as “dry still considered “dry by default” states. Kansas’ by default.” status is arguably not much of a shock. Its state-level Most states are inProhibition was on the books for a whopping 68 herently “wet.” Some states, primarily states years, from 1881 to 1948, and it was the de facto home in the South, allow base to the infamous hatchet-swinging temperance counties to pass “dry” movement leader Carry Nation. Tennessee is legislation that prohibits considerably more surprising given its robust ties to the sales and distributhe spirits industry, although the law does add an tion of liquor within their extra layer of backwoods mystique to the state’s boundaries. From 1966 “Jack Daniel’s is produced in a dry county” until this past January, Misnarrative. With Mississippi’s law reversing sissippi walked the exact opits “dry by default” status, these two posite path, prohibiting alcohol holdouts are now on the clock. in the state unless counties passed legislation allowing for booze. The e all know the 21st Amendment repealed the 18th Amendment and ended Prohibition. We’ve all seen images of people gathered on December 5, 1933, joyously hoisting a legal libation. Distillers, industry professionals, and imbibers around the country are wont to celebrate this date with a tipple, and appropriately so. Yet every so often, a story comes along to remind us that pesky remnants of The Noble Experiment remain like stuck crumbs at the bottom of a muffin tin after a washing, and there is still some work to be done on what history largely considers a resolved issue. The beginning of 2021 gave us such a reminder, and it was a doozy. Prohibition finally ended in seventeen of Mississippi’s counties, ninety years after the

new law flipped the switch by removing the “dry by default” designation, thus removing restrictions in counties that had no “wet” laws on their ledger. The new freedoms afforded by the affected county residents include the legal possession of liquor, although it’s assumed that this may not have been much of a concern in the first place. “I don’t know much about the enforcement of possession laws,” Patrick stated. “However, it wouldn’t be surprising to find out the people in charge of enforcing the laws were also the ones that were breaking them.” Patrick’s statement isn’t flippant. In a roundabout way, it calls back to a key moment in Mississippi’s Prohibition lore. In February 1966, then-Governor Paul Johnson got caught attending an illicit Mardi Gras ball at a Jackson country club with other Mississippi socialites. Johnson signed off on Prohibition’s state-level repeal three months later. The new law reversing the “dry by default” designation wasn’t spurred by hands caught in cookie jars. At the same time, it doesn’t have as massive of an impact as it may look on paper. The counties most affected by the law are rural areas — Mississippi’s mass population centers have been wet for decades. It doesn’t make the state fully wet, either. Despite being “dry by default,” 29 counties still saw fit to pass their own dry laws. These provisions may make the new legislation appear as nothing more than a showy, empty gesture to the cynical outsider. To a distiller like Patrick, however, the new law is a crucial decision. “This opens the door for more opportunity in some of the areas affected by the law,” he said. “Things won’t change overnight, but eventually, it may produce new business opportunities in WWW.ART ISANSPI RI TMAG.CO M