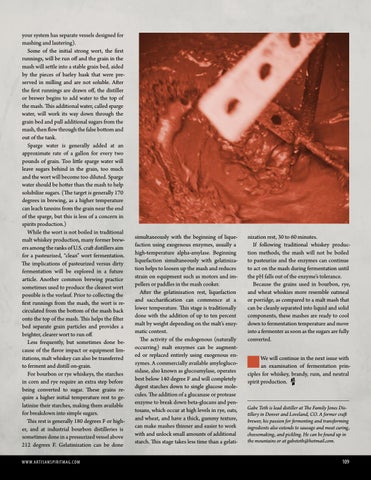 your system has separate vessels designed for mashing and lautering). Some of the initial strong wort, the first runnings, will be run off and the grain in the mash will settle into a stable grain bed, aided by the pieces of barley husk that were preserved in milling and are not soluble. After the first runnings are drawn off, the distiller or brewer begins to add water to the top of the mash. This additional water, called sparge water, will work its way down through the grain bed and pull additional sugars from the mash, then flow through the false bottom and out of the tank. Sparge water is generally added at an approximate rate of a gallon for every two pounds of grain. Too little sparge water will leave sugars behind in the grain, too much and the wort will become too diluted. Sparge water should be hotter than the mash to help solubilize sugars. (The target is generally 170 degrees in brewing, as a higher temperature can leach tannins from the grain near the end of the sparge, but this is less of a concern in spirits production.) While the wort is not boiled in traditional malt whiskey production, many former brewers among the ranks of U.S. craft distillers aim for a pasteurized, “clean” wort fermentation. The implications of pasteurized versus dirty fermentation will be explored in a future article. Another common brewing practice sometimes used to produce the clearest wort possible is the vorlauf. Prior to collecting the first runnings from the mash, the wort is recirculated from the bottom of the mash back onto the top of the mash. This helps the filter bed separate grain particles and provides a brighter, clearer wort to run off. Less frequently, but sometimes done because of the flavor impact or equipment limitations, malt whiskey can also be transferred to ferment and distill on-grain. For bourbon or rye whiskeys, the starches in corn and rye require an extra step before being converted to sugar. These grains require a higher initial temperature rest to gelatinize their starches, making them available for breakdown into simple sugars. This rest is generally 180 degrees F or higher, and at industrial bourbon distilleries is sometimes done in a pressurized vessel above 212 degrees F. Gelatinization can be done WWW.ART ISANSP IRITMAG.COM

simultaneously with the beginning of liquefaction using exogenous enzymes, usually a high-temperature alpha-amylase. Beginning liquefaction simultaneously with gelatinization helps to loosen up the mash and reduces strain on equipment such as motors and impellers or paddles in the mash cooker. After the gelatinization rest, liquefaction and saccharification can commence at a lower temperature. This stage is traditionally done with the addition of up to ten percent malt by weight depending on the malt’s enzymatic content. The activity of the endogenous (naturally occurring) malt enzymes can be augmented or replaced entirely using exogenous enzymes. A commercially available amyloglucosidase, also known as glucoamylase, operates best below 140 degree F and will completely digest starches down to single glucose molecules. The addition of a glucanase or protease enzyme to break down beta-glucans and pentosans, which occur at high levels in rye, oats, and wheat, and have a thick, gummy texture, can make mashes thinner and easier to work with and unlock small amounts of additional starch. This stage takes less time than a gelati-

nization rest, 30 to 60 minutes. If following traditional whiskey production methods, the mash will not be boiled to pasteurize and the enzymes can continue to act on the mash during fermentation until the pH falls out of the enzyme’s tolerance. Because the grains used in bourbon, rye, and wheat whiskies more resemble oatmeal or porridge, as compared to a malt mash that can be cleanly separated into liquid and solid components, these mashes are ready to cool down to fermentation temperature and move into a fermenter as soon as the sugars are fully converted. We will continue in the next issue with an examination of fermentation principles for whiskey, brandy, rum, and neutral spirit production.

Gabe Toth is lead distiller at The Family Jones Distillery in Denver and Loveland, CO. A former craft brewer, his passion for fermenting and transforming ingredients also extends to sausage and meat curing, cheesemaking, and pickling. He can be found up in the mountains or at gabetoth@hotmail.com.