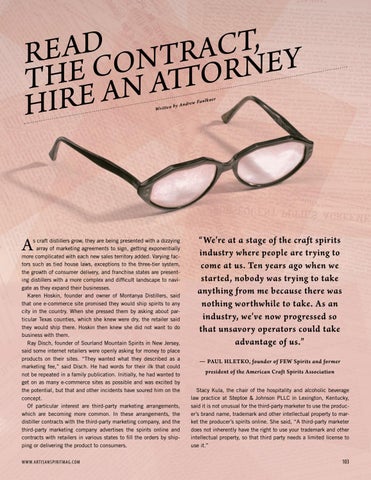 s craft distillers grow, they are being presented with a dizzying array of marketing agreements to sign, getting exponentially more complicated with each new sales territory added. Varying factors such as tied house laws, exceptions to the three-tier system, the growth of consumer delivery, and franchise states are presenting distillers with a more complex and difficult landscape to navigate as they expand their businesses. Karen Hoskin, founder and owner of Montanya Distillers, said that one e-commerce site promised they would ship spirits to any city in the country. When she pressed them by asking about particular Texas counties, which she knew were dry, the retailer said they would ship there. Hoskin then knew she did not want to do business with them. Ray Disch, founder of Sourland Mountain Spirits in New Jersey, said some internet retailers were openly asking for money to place products on their sites. “They wanted what they described as a marketing fee,” said Disch. He had words for their ilk that could not be repeated in a family publication. Initially, he had wanted to get on as many e-commerce sites as possible and was excited by the potential, but that and other incidents have soured him on the concept. Of particular interest are third-party marketing arrangements, which are becoming more common. In these arrangements, the distiller contracts with the third-party marketing company, and the third-party marketing company advertises the spirits online and contracts with retailers in various states to fill the orders by shipping or delivering the product to consumers. WWW.ART ISANSP IRITMAG.COM

“We&#39;re at a stage of the craft spirits industry where people are trying to come at us. Ten years ago when we started, nobody was trying to take anything from me because there was nothing worthwhile to take. As an industry, we&#39;ve now progressed so that unsavory operators could take advantage of us.” — PAUL HLETKO, founder of FEW Spirits and former president of the American Craft Spirits Association Stacy Kula, the chair of the hospitality and alcoholic beverage law practice at Steptoe &amp; Johnson PLLC in Lexington, Kentucky, said it is not unusual for the third-party marketer to use the producer’s brand name, trademark and other intellectual property to market the producer’s spirits online. She said, “A third-party marketer does not inherently have the right to use your trademark and other intellectual property, so that third party needs a limited license to use it.”