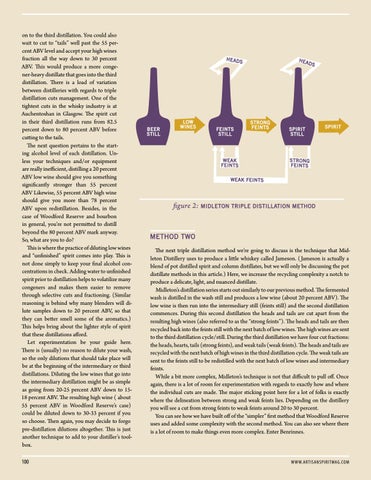 on to the third distillation. You could also wait to cut to “tails” well past the 55 percent ABV level and accept your high wines fraction all the way down to 30 percent ABV. This would produce a more congener-heavy distillate that goes into the third distillation. There is a load of variation between distilleries with regards to triple distillation cuts management. One of the tightest cuts in the whisky industry is at Auchentoshan in Glasgow. The spirit cut in their third distillation runs from 82.5 percent down to 80 percent ABV before cutting to the tails. The next question pertains to the starting alcohol level of each distillation. Unless your techniques and/or equipment are really inefficient, distilling a 20 percent ABV low wine should give you something significantly stronger than 55 percent ABV Likewise, 55 percent ABV high wine should give you more than 78 percent ABV upon redistillation. Besides, in the case of Woodford Reserve and bourbon in general, you’re not permitted to distill beyond the 80 percent ABV mark anyway. So, what are you to do? This is where the practice of diluting low wines and “unfinished” spirit comes into play. This is not done simply to keep your final alcohol concentrations in check. Adding water to unfinished spirit prior to distillation helps to volatilize many congeners and makes them easier to remove through selective cuts and fractioning. (Similar reasoning is behind why many blenders will dilute samples down to 20 percent ABV, so that they can better smell some of the aromatics.) This helps bring about the lighter style of spirit that these distillations afford. Let experimentation be your guide here. There is (usually) no reason to dilute your wash, so the only dilutions that should take place will be at the beginning of the intermediary or third distillations. Diluting the low wines that go into the intermediary distillation might be as simple as going from 20-25 percent ABV down to 1518 percent ABV. The resulting high wine ( about 55 percent ABV in Woodford Reserve’s case) could be diluted down to 30-33 percent if you so choose. Then again, you may decide to forgo pre-distillation dilutions altogether. This is just another technique to add to your distiller’s toolbox. 100

METHOD TWO The next triple distillation method we’re going to discuss is the technique that Midleton Distillery uses to produce a little whiskey called Jameson. ( Jameson is actually a blend of pot distilled spirit and column distillates, but we will only be discussing the pot distillate methods in this article.) Here, we increase the recycling complexity a notch to produce a delicate, light, and nuanced distillate. Midleton’s distillation series starts out similarly to our previous method. The fermented wash is distilled in the wash still and produces a low wine (about 20 percent ABV). The low wine is then run into the intermediary still (feints still) and the second distillation commences. During this second distillation the heads and tails are cut apart from the resulting high wines (also referred to as the “strong feints”). The heads and tails are then recycled back into the feints still with the next batch of low wines. The high wines are sent to the third distillation cycle/still. During the third distillation we have four cut fractions: the heads, hearts, tails (strong feints), and weak tails (weak feints). The heads and tails are recycled with the next batch of high wines in the third distillation cycle. The weak tails are sent to the feints still to be redistilled with the next batch of low wines and intermediary feints. While a bit more complex, Midleton’s technique is not that difficult to pull off. Once again, there is a lot of room for experimentation with regards to exactly how and where the individual cuts are made. The major sticking point here for a lot of folks is exactly where the delineation between strong and weak feints lies. Depending on the distillery you will see a cut from strong feints to weak feints around 20 to 30 percent. You can see how we have built off of the “simpler” first method that Woodford Reserve uses and added some complexity with the second method. You can also see where there is a lot of room to make things even more complex. Enter Benrinnes.