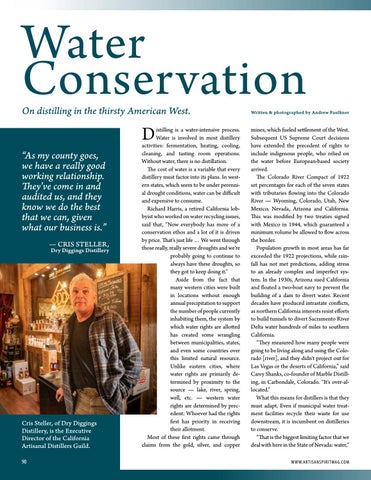 Water Conservation On distilling in the thirsty American West.

“As my county goes, we have a really good working relationship. They've come in and audited us, and they know we do the best that we can, given what our business is.” — CRIS STELLER, Dry Diggings Distillery

Cris Steller, of Dry Diggings Distillery, is the Executive Director of the California Artisanal Distillers Guild. 90

istilling is a water-intensive process. Water is involved in most distillery activities: fermentation, heating, cooling, cleaning, and tasting room operations. Without water, there is no distillation. The cost of water is a variable that every distillery must factor into its plans. In western states, which seem to be under perennial drought conditions, water can be difficult and expensive to consume. Richard Harris, a retired California lobbyist who worked on water recycling issues, said that, “Now everybody has more of a conservation ethos and a lot of it is driven by price. That's just life … We went through those really, really severe droughts and we're probably going to continue to always have these droughts, so they got to keep doing it.” Aside from the fact that many western cities were built in locations without enough annual precipitation to support the number of people currently inhabiting them, the system by which water rights are allotted has created some wrangling between municipalities, states, and even some countries over this limited natural resource. Unlike eastern cities, where water rights are primarily determined by proximity to the source — lake, river, spring, well, etc. — western water rights are determined by precedent: Whoever had the rights first has priority in receiving their allotment. Most of these first rights came through claims from the gold, silver, and copper

mines, which fueled settlement of the West. Subsequent US Supreme Court decisions have extended the precedent of rights to include indigenous people, who relied on the water before European-based society arrived. The Colorado River Compact of 1922 set percentages for each of the seven states with tributaries flowing into the Colorado River — Wyoming, Colorado, Utah, New Mexico, Nevada, Arizona and California. This was modified by two treaties signed with Mexico in 1944, which guaranteed a minimum volume be allowed to flow across the border. Population growth in most areas has far exceeded the 1922 projections, while rainfall has not met predictions, adding stress to an already complex and imperfect system. In the 1930s, Arizona sued California and floated a two-boat navy to prevent the building of a dam to divert water. Recent decades have produced intrastate conflicts, as northern California interests resist efforts to build tunnels to divert Sacramento River Delta water hundreds of miles to southern California. “They measured how many people were going to be living along and using the Colorado [river], and they didn't project out for Las Vegas or the deserts of California,” said Carey Shanks, co-founder of Marble Distilling, in Carbondale, Colorado. “It's over-allocated.” What this means for distillers is that they must adapt. Even if municipal water treatment facilities recycle their waste for use downstream, it is incumbent on distilleries to conserve. “That is the biggest limiting factor that we deal with here in the State of Nevada: water,” WWW.ART ISANSPI RI TMAG.CO M