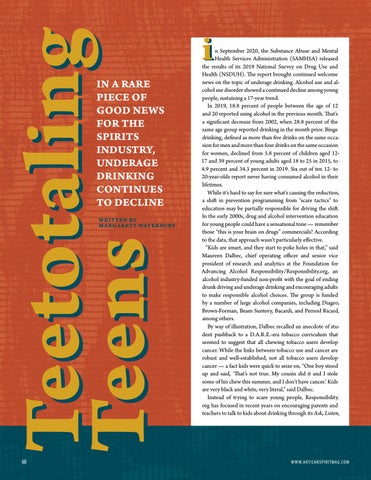 Teetotaling Teens IN A RARE PIECE OF GOOD NEWS FOR THE SPIRITS INDUSTRY, UNDERAGE DRINKING CONTINUES TO DECLINE

n September 2020, the Substance Abuse and Mental Health Services Administration (SAMHSA) released the results of its 2019 National Survey on Drug Use and Health (NSDUH). The report brought continued welcome news on the topic of underage drinking. Alcohol use and alcohol use disorder showed a continued decline among young people, sustaining a 17-year trend. In 2019, 18.8 percent of people between the age of 12 and 20 reported using alcohol in the previous month. That’s a significant decrease from 2002, when 28.8 percent of the same age group reported drinking in the month prior. Binge drinking, defined as more than five drinks on the same occasion for men and more than four drinks on the same occasion for women, declined from 5.8 percent of children aged 1217 and 39 percent of young adults aged 18 to 25 in 2015, to 4.9 percent and 34.3 percent in 2019. Six out of ten 12- to 20-year-olds report never having consumed alcohol in their lifetimes. While it’s hard to say for sure what’s causing the reduction, a shift in prevention programming from “scare tactics” to education may be partially responsible for driving the shift. In the early 2000s, drug and alcohol intervention education for young people could have a sensational tone — remember those “this is your brain on drugs” commercials? According to the data, that approach wasn’t particularly effective. “Kids are smart, and they start to poke holes in that,” said Maureen Dalbec, chief operating officer and senior vice president of research and analytics at the Foundation for Advancing Alcohol Responsibility/Responsibility.org, an alcohol industry-funded non-profit with the goal of ending drunk driving and underage drinking and encouraging adults to make responsible alcohol choices. The group is funded by a number of large alcohol companies, including Diageo, Brown-Forman, Beam Suntory, Bacardi, and Pernod Ricard, among others. By way of illustration, Dalbec recalled an anecdote of student pushback to a D.A.R.E.-era tobacco curriculum that seemed to suggest that all chewing tobacco users develop cancer. While the links between tobacco use and cancer are robust and well-established, not all tobacco users develop cancer — a fact kids were quick to seize on. “One boy stood up and said, ‘That’s not true. My cousin did it and I stole some of his chew this summer, and I don’t have cancer.’ Kids are very black and white, very literal,” said Dalbec. Instead of trying to scare young people, Responsibility. org has focused in recent years on encouraging parents and teachers to talk to kids about drinking through its Ask, Listen,