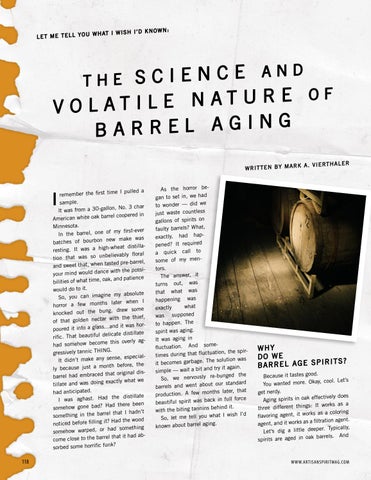 e I pulled a remember the first tim sample. , No. 3 char It was from a 30-gallon rel coopered in American white oak bar

Minnesota. my first-ever In the barrel, one of new make was batches of bourbon h-wheat distillaresting. It was a hig ievably floral tion that was so unbel ted pre-barrel, and sweet that, when tas with the possiyour mind would dance , and patience bilities of what time, oak would do to it. my absolute So, you can imagine later when I horror a few months ng, drew some knocked out the bu with the thief, of that golden nectar and it was horpoured it into a glass… icate distillate rific. That beautiful del this overly age had somehow becom . gressively tannic THING se, especialsen any ke It didn’t ma nth before, the ly because just a mo t original distha barrel had embraced exactly what we tillate and was doing had anticipated. the distillate I was aghast. Had d there been Ha somehow gone bad? that I hadn’t something in the barrel Had the wood noticed before filling it? had something somehow warped, or that it had abcome close to the barrel k? sorbed some horrific fun

As the horror began to set in, we had to wonder — did we just waste countless gallons of spirits on faulty barrels? What, exactly, had hap-

pened? It required a quick call to some of my mentors. The answer, it turns out, was that what was happening was what exactly ed pos sup s wa e Th . pen to hap ng. spirit was agi It was aging in efluctuation. And som ation, the spirtimes during that fluctu e solution was it becomes garbage. Th try it again. simple — wait a bit and bunged the reSo, we nervously ut our standard barrels and went abo nths later, that production. A few mo k in full force beautiful spirit was bac ind it. beh with the biting tannins at I wish I’d So, let me tell you wh ng. known about barrel agi

WHY DO W E IT S? BA RR EL AG E SP IR Because it tastes good. cool. Let’s You wanted more. Okay, get nerdy. ectively does Aging spirits in oak eff : It works as a three different things as a coloring flavoring agent, it works filtration agent. agent, and it works as a per. Typically, Let’s dig a little dee barrels. And spirits are aged in oak