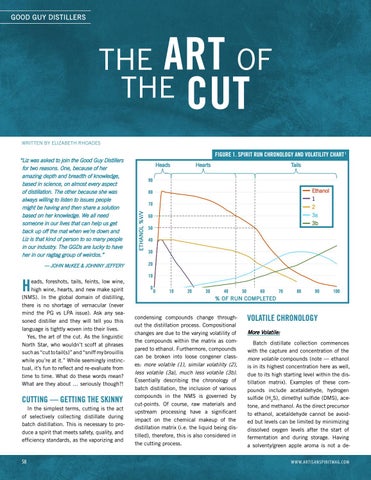 THE ART OF THE CUT WRITTEN BY ELIZABETH RHOADES

eads, foreshots, tails, feints, low wine, high wine, hearts, and new make spirit (NMS). In the global domain of distilling, there is no shortage of vernacular (never mind the PG vs LPA issue). Ask any seasoned distiller and they will tell you this language is tightly woven into their lives. Yes, the art of the cut. As the linguistic North Star, who wouldn’t scoff at phrases such as “cut to tail(s)” and “sniff my brouillis while you’re at it.” While seemingly instinctual, it’s fun to reflect and re-evaluate from time to time. What do these words mean? What are they about … seriously though?!

CUTTING — GETTING THE SKINNY In the simplest terms, cutting is the act of selectively collecting distillate during batch distillation. This is necessary to produce a spirit that meets safety, quality, and efficiency standards, as the vaporizing and

“Liz was asked to join the Good Guy Distillers for two reasons. One, because of her amazing depth and breadth of knowledge, based in science, on almost every aspect of distillation. The other because she was always willing to listen to issues people might be having and then share a solution based on her knowledge. We all need someone in our lives that can help us get back up off the mat when we’re down and Liz is that kind of person to so many people in our industry. The GGDs are lucky to have her in our ragtag group of weirdos.”

condensing compounds change throughout the distillation process. Compositional changes are due to the varying volatility of the compounds within the matrix as compared to ethanol. Furthermore, compounds can be broken into loose congener classes: more volatile (1), similar volatility (2), less volatile (3a), much less volatile (3b). Essentially describing the chronology of batch distillation, the inclusion of various compounds in the NMS is governed by cut-points. Of course, raw materials and upstream processing have a significant impact on the chemical makeup of the distillation matrix (i.e. the liquid being distilled), therefore, this is also considered in the cutting process.

VOLATILE CHRONOLOGY More Volatile: Batch distillate collection commences with the capture and concentration of the more volatile compounds (note — ethanol is in its highest concentration here as well, due to its high starting level within the distillation matrix). Examples of these compounds include acetaldehyde, hydrogen sulfide (H2S), dimethyl sulfide (DMS), acetone, and methanol. As the direct precursor to ethanol, acetaldehyde cannot be avoided but levels can be limited by minimizing dissolved oxygen levels after the start of fermentation and during storage. Having a solventy/green apple aroma is not a deWWW.ART ISANSPI RI TMAG.CO M