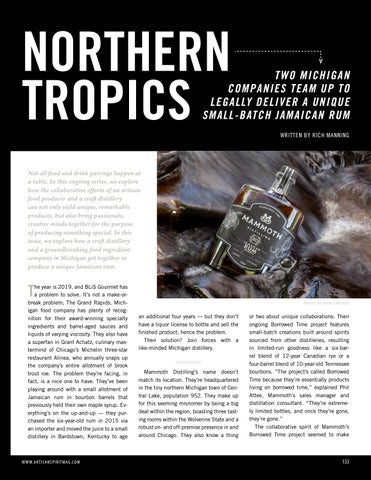 Not all food and drink pairings happen at a table. In this ongoing series, we explore how the collaborative efforts of an artisan food producer and a craft distillery can not only yield unique, remarkable products, but also bring passionate, creative minds together for the purpose of producing something special. In this issue, we explore how a craft distillery and a groundbreaking food ingredient company in Michigan got together to produce a unique Jamaican rum.

he year is 2019, and BLiS Gourmet has a problem to solve. It’s not a make-orbreak problem; The Grand Rapids, Michigan food company has plenty of recognition for their award-winning specialty ingredients and barrel-aged sauces and liquids of varying viscosity. They also have a superfan in Grant Achatz, culinary mastermind of Chicago’s Michelin three-star restaurant Alinea, who annually snaps up the company’s entire allotment of brook trout roe. The problem they’re facing, in fact, is a nice one to have: They’ve been playing around with a small allotment of Jamaican rum in bourbon barrels that previously held their own maple syrup. Everything’s on the up-and-up — they purchased the six-year-old rum in 2015 via an importer and moved the juice to a small distillery in Bardstown, Kentucky to age

an additional four years — but they don’t have a liquor license to bottle and sell the finished product, hence the problem. Their solution? Join forces with a like-minded Michigan distillery.

Mammoth Distilling’s name doesn’t match its location. They’re headquartered in the tiny northern Michigan town of Central Lake, population 952. They make up for this seeming misnomer by being a big deal within the region, boasting three tasting rooms within the Wolverine State and a robust on- and off-premise presence in and around Chicago. They also know a thing