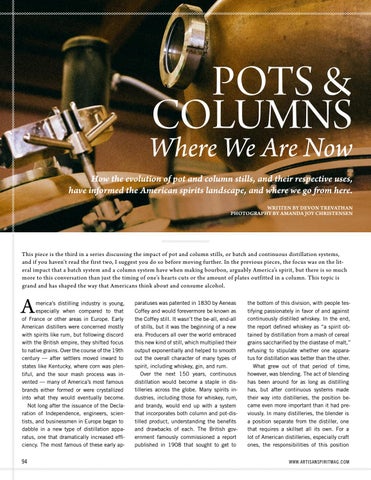 Where We Are Now How the evolution of pot and column stills, and their respective uses, have informed the American spirits landscape, and where we go from here. WRITTEN BY DEVON TREVATHAN PHOTOGRAPHY BY AMANDA JOY CHRISTENSEN

This piece is the third in a series discussing the impact of pot and column stills, or batch and continuous distillation systems, and if you haven’t read the first two, I suggest you do so before moving further. In the previous pieces, the focus was on the literal impact that a batch system and a column system have when making bourbon, arguably America’s spirit, but there is so much more to this conversation than just the timing of one’s hearts cuts or the amount of plates outfitted in a column. This topic is grand and has shaped the way that Americans think about and consume alcohol.

merica’s distilling industry is young, especially when compared to that of France or other areas in Europe. Early American distillers were concerned mostly with spirits like rum, but following discord with the British empire, they shifted focus to native grains. Over the course of the 19th century — after settlers moved inward to states like Kentucky, where corn was plentiful, and the sour mash process was invented — many of America’s most famous brands either formed or were crystallized into what they would eventually become. Not long after the issuance of the Declaration of Independence, engineers, scientists, and businessmen in Europe began to dabble in a new type of distillation apparatus, one that dramatically increased efficiency. The most famous of these early ap-

paratuses was patented in 1830 by Aeneas Coffey and would forevermore be known as the Coffey still. It wasn’t the be-all, end-all of stills, but it was the beginning of a new era. Producers all over the world embraced this new kind of still, which multiplied their output exponentially and helped to smooth out the overall character of many types of spirit, including whiskey, gin, and rum. Over the next 150 years, continuous distillation would become a staple in distilleries across the globe. Many spirits industries, including those for whiskey, rum, and brandy, would end up with a system that incorporates both column and pot-distilled product, understanding the benefits and drawbacks of each. The British government famously commissioned a report published in 1908 that sought to get to

the bottom of this division, with people testifying passionately in favor of and against continuously distilled whiskey. In the end, the report defined whiskey as “a spirit obtained by distillation from a mash of cereal grains saccharified by the diastase of malt,” refusing to stipulate whether one apparatus for distillation was better than the other. What grew out of that period of time, however, was blending. The act of blending has been around for as long as distilling has, but after continuous systems made their way into distilleries, the position became even more important than it had previously. In many distilleries, the blender is a position separate from the distiller, one that requires a skillset all its own. For a lot of American distilleries, especially craft ones, the responsibilities of this position WWW.ARTISANSPIRITMAG.COM