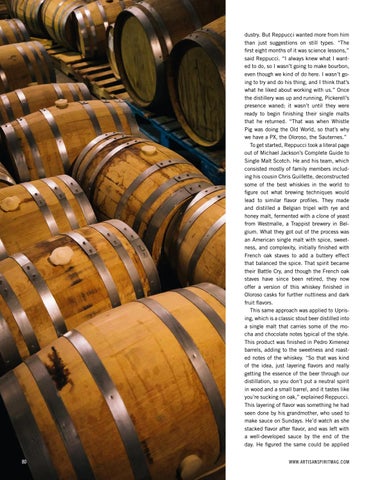 dustry. But Reppucci wanted more from him than just suggestions on still types. “The first eight months of it was science lessons,” said Reppucci. “I always knew what I wanted to do, so I wasn’t going to make bourbon, even though we kind of do here. I wasn’t going to try and do his thing, and I think that’s what he liked about working with us.” Once the distillery was up and running, Pickerell’s presence waned; it wasn’t until they were ready to begin finishing their single malts that he returned. “That was when Whistle Pig was doing the Old World, so that’s why we have a PX, the Oloroso, the Sauternes.” To get started, Reppucci took a literal page out of Michael Jackson’s Complete Guide to Single Malt Scotch. He and his team, which consisted mostly of family members including his cousin Chris Guillette, deconstructed some of the best whiskies in the world to figure out what brewing techniques would lead to similar flavor profiles. They made and distilled a Belgian tripel with rye and honey malt, fermented with a clone of yeast from Westmalle, a Trappist brewery in Belgium. What they got out of the process was an American single malt with spice, sweetness, and complexity, initially finished with French oak staves to add a buttery effect that balanced the spice. That spirit became their Battle Cry, and though the French oak staves have since been retired, they now offer a version of this whiskey finished in Oloroso casks for further nuttiness and dark fruit flavors. This same approach was applied to Uprising, which is a classic stout beer distilled into a single malt that carries some of the mocha and chocolate notes typical of the style. This product was finished in Pedro Ximenez barrels, adding to the sweetness and roasted notes of the whiskey. “So that was kind of the idea, just layering flavors and really getting the essence of the beer through our distillation, so you don’t put a neutral spirit in wood and a small barrel, and it tastes like you’re sucking on oak,” explained Reppucci. This layering of flavor was something he had seen done by his grandmother, who used to make sauce on Sundays. He’d watch as she stacked flavor after flavor, and was left with a well-developed sauce by the end of the day. He figured the same could be applied