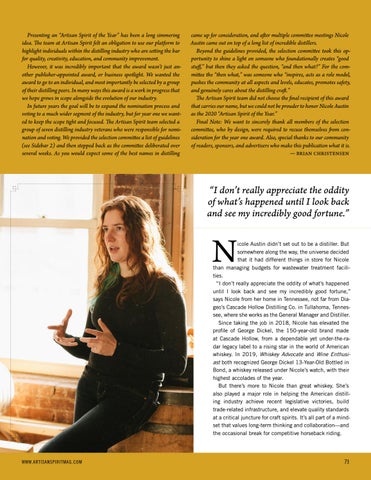 Presenting an “Artisan Spirit of the Year” has been a long simmering idea. The team at Artisan Spirit felt an obligation to use our platform to highlight individuals within the distilling industry who are setting the bar for quality, creativity, education, and community improvement. However, it was incredibly important that the award wasn't just another publisher-appointed award, or business spotlight. We wanted the award to go to an individual, and most importantly be selected by a group of their distilling peers. In many ways this award is a work in progress that we hope grows in scope alongside the evolution of our industry. In future years the goal will be to expand the nomination process and voting to a much wider segment of the industry, but for year one we wanted to keep the scope tight and focused. The Artisan Spirit team selected a group of seven distilling industry veterans who were responsible for nomination and voting. We provided the selection committee a list of guidelines (see Sidebar 2) and then stepped back as the committee deliberated over several weeks. As you would expect some of the best names in distilling

came up for consideration, and after multiple committee meetings Nicole Austin came out on top of a long list of incredible distillers. Beyond the guidelines provided, the selection committee took this opportunity to shine a light on someone who foundationally creates “good stuff,” but then they asked the question, “and then what?” For the committee the “then what,” was someone who “inspires, acts as a role model, pushes the community at all aspects and levels, educates, promotes safety, and genuinely cares about the distilling craft.” The Artisan Spirit team did not choose the final recipient of this award that carries our name, but we could not be prouder to honor Nicole Austin as the 2020 “Artisan Spirit of the Year.” Final Note: We want to sincerely thank all members of the selection committee, who by design, were required to recuse themselves from consideration for the year one award. Also, special thanks to our community of readers, sponsors, and advertisers who make this publication what it is. — BRIAN CHRISTENSEN

“I don’t really appreciate the oddity of what’s happened until I look back and see my incredibly good fortune.”

icole Austin didn’t set out to be a distiller. But somewhere along the way, the universe decided that it had different things in store for Nicole than managing budgets for wastewater treatment facilities. “I don’t really appreciate the oddity of what’s happened until I look back and see my incredibly good fortune,” says Nicole from her home in Tennessee, not far from Diageo’s Cascade Hollow Distilling Co. in Tullahoma, Tennessee, where she works as the General Manager and Distiller. Since taking the job in 2018, Nicole has elevated the profile of George Dickel, the 150-year-old brand made at Cascade Hollow, from a dependable yet under-the-radar legacy label to a rising star in the world of American whiskey. In 2019, Whiskey Advocate and Wine Enthusiast both recognized George Dickel 13-Year-Old Bottled in Bond, a whiskey released under Nicole’s watch, with their highest accolades of the year. But there’s more to Nicole than great whiskey. She’s also played a major role in helping the American distilling industry achieve recent legislative victories, build trade-related infrastructure, and elevate quality standards at a critical juncture for craft spirits. It’s all part of a mindset that values long-term thinking and collaboration—and the occasional break for competitive horseback riding.