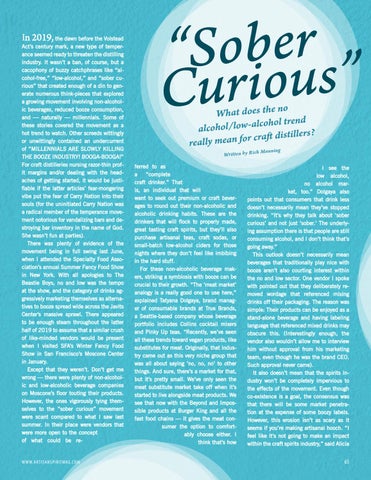 In 2019, the dawn before the Volstead

Act’s century mark, a new type of temperance seemed ready to threaten the distilling industry. It wasn’t a ban, of course, but a cacophony of buzzy catchphrases like “alcohol-free,” “low-alcohol,” and “sober curious” that created enough of a din to generate numerous think-pieces that explored a growing movement involving non-alcoholic beverages, reduced booze consumption, and — naturally — millennials. Some of these stories covered the movement as a hot trend to watch. Other screeds wittingly or unwittingly contained an undercurrent of “MILLENNIALS ARE SLOWLY KILLING THE BOOZE INDUSTRY! BOOGA-BOOGA!” For craft distilleries nursing razor-thin profit margins and/or dealing with the headaches of getting started, it would be justifiable if the latter articles’ fear-mongering vibe put the fear of Carry Nation into their souls (for the uninitiated Carry Nation was a radical member of the temperance movement notorious for vandalizing bars and destroying bar inventory in the name of God. She wasn’t fun at parties). There was plenty of evidence of the movement being in full swing last June, when I attended the Specialty Food Association’s annual Summer Fancy Food Show in New York. With all apologies to The Beastie Boys, no and low was the tempo at the show, and the category of drinks aggressively marketing themselves as alternatives to booze spread wide across the Javits Center’s massive sprawl. There appeared to be enough steam throughout the latter half of 2019 to assume that a similar crush of like-minded vendors would be present when I visited SFA’s Winter Fancy Food Show in San Francisco’s Moscone Center in January. Except that they weren’t. Don’t get me wrong — there were plenty of non-alcoholic and low-alcoholic beverage companies on Moscone’s floor touting their products. However, the ones vigorously tying themselves to the “sober curious” movement were scant compared to what I saw last summer. In their place were vendors that were more open to the concept of what could be re-

ferred to as a “complete craft drinker.” That is, an individual that will want to seek out premium or craft beverages to round out their non-alcoholic and alcoholic drinking habits. These are the drinkers that will flock to properly made, great tasting craft spirits, but they’ll also purchase artisanal teas, craft sodas, or small-batch low-alcohol ciders for those nights where they don’t feel like imbibing in the hard stuff. For these non-alcoholic beverage makers, striking a symbiosis with booze can be crucial to their growth. “The ‘meat market’ analogy is a really good one to use here,” explained Tatyana Dolgaya, brand manager of consumable brands at True Brands, a Seattle-based company whose beverage portfolio includes Collins cocktail mixers and Pinky Up teas. “Recently, we’ve seen all these trends toward vegan products, like substitutes for meat. Originally, that industry came out as this very niche group that was all about saying ‘no, no, no’ to other things. And sure, there’s a market for that, but it’s pretty small. We’ve only seen the meat substitute market take off when it’s started to live alongside meat products. We see that now with the Beyond and Impossible products at Burger King and all the fast food chains — it gives the meat consumer the option to comfortably choose either. I think that’s how

I see the low alcohol, no alcohol market, too.” Dolgaya also points out that consumers that drink less doesn’t necessarily mean they’ve stopped drinking. “It’s why they talk about ‘sober curious’ and not just ‘sober.’ The underlying assumption there is that people are still consuming alcohol, and I don’t think that’s going away.” This outlook doesn’t necessarily mean beverages that traditionally play nice with booze aren’t also courting interest within the no and low sector. One vendor I spoke with pointed out that they deliberately removed wordage that referenced mixing drinks off their packaging. The reason was simple: Their products can be enjoyed as a stand-alone beverage and having labeling language that referenced mixed drinks may obscure this. (Interestingly enough, the vendor also wouldn’t allow me to interview him without approval from his marketing team, even though he was the brand CEO. Such approval never came). It also doesn’t mean that the spirits industry won’t be completely impervious to the effects of the movement. Even though co-existence is a goal, the consensus was that there will be some market penetration at the expense of some boozy labels. However, this erosion isn’t as scary as it seems if you’re making artisanal hooch. “I feel like it’s not going to make an impact within the craft spirits industry,” said Alicia