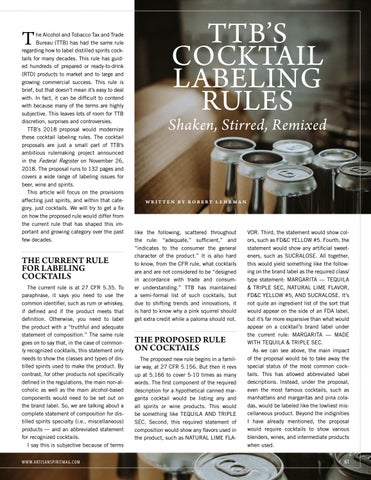 he Alcohol and Tobacco Tax and Trade Bureau (TTB) has had the same rule regarding how to label distilled spirits cocktails for many decades. This rule has guided hundreds of prepared or ready-to-drink (RTD) products to market and to large and growing commercial success. This rule is brief, but that doesn’t mean it’s easy to deal with. In fact, it can be difficult to contend with because many of the terms are highly subjective. This leaves lots of room for TTB discretion, surprises and controversies. TTB’s 2018 proposal would modernize these cocktail labeling rules. The cocktail proposals are just a small part of TTB’s ambitious rulemaking project announced in the Federal Register on November 26, 2018. The proposal runs to 132 pages and covers a wide range of labeling issues for beer, wine and spirits. This article will focus on the provisions affecting just spirits, and within that category, just cocktails. We will try to get a fix on how the proposed rule would differ from the current rule that has shaped this important and growing category over the past few decades.

THE CURRENT RULE FOR LABELING COCKTAILS The current rule is at 27 CFR 5.35. To paraphrase, it says you need to use the common identifier, such as rum or whiskey, if defined and if the product meets that definition. Otherwise, you need to label the product with a “truthful and adequate statement of composition.” The same rule goes on to say that, in the case of commonly recognized cocktails, this statement only needs to show the classes and types of distilled spirits used to make the product. By contrast, for other products not specifically defined in the regulations, the main non-alcoholic as well as the main alcohol-based components would need to be set out on the brand label. So, we are talking about a complete statement of composition for distilled spirits specialty (i.e., miscellaneous) products — and an abbreviated statement for recognized cocktails. I say this is subjective because of terms WWW.ART ISANSP IRITMAG.COM

like the following, scattered throughout the rule: “adequate,” sufficient,” and “indicates to the consumer the general character of the product.” It is also hard to know, from the CFR rule, what cocktails are and are not considered to be “designed in accordance with trade and consumer understanding.” TTB has maintained a semi-formal list of such cocktails, but due to shifting trends and innovations, it is hard to know why a pink squirrel should get extra credit while a paloma should not.

THE PROPOSED RULE ON COCKTAILS The proposed new rule begins in a familiar way, at 27 CFR 5.156. But then it revs up at 5.166 to cover 5-10 times as many words. The first component of the required description for a hypothetical canned margarita cocktail would be listing any and all spirits or wine products. This would be something like TEQUILA AND TRIPLE SEC. Second, this required statement of composition would show any flavors used in the product, such as NATURAL LIME FLA-

VOR. Third, the statement would show colors, such as FD&C YELLOW #5. Fourth, the statement would show any artificial sweeteners, such as SUCRALOSE. All together, this would yield something like the following on the brand label as the required class/ type statement: MARGARITA — TEQUILA & TRIPLE SEC, NATURAL LIME FLAVOR, FD&C YELLOW #5, AND SUCRALOSE. It’s not quite an ingredient list of the sort that would appear on the side of an FDA label, but it’s far more expansive than what would appear on a cocktail’s brand label under the current rule: MARGARITA — MADE WITH TEQUILA & TRIPLE SEC. As we can see above, the main impact of the proposal would be to take away the special status of the most common cocktails. This has allowed abbreviated label descriptions. Instead, under the proposal, even the most famous cocktails, such as manhattans and margaritas and pina coladas, would be labeled like the lowliest miscellaneous product. Beyond the indignities I have already mentioned, the proposal would require cocktails to show various blenders, wines, and intermediate products when used.