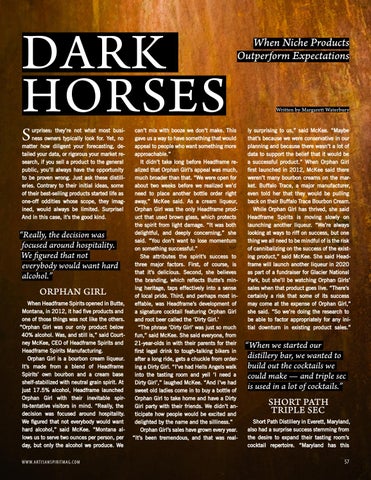 urprises: they’re not what most business owners typically look for. Yet, no matter how diligent your forecasting, detailed your data, or rigorous your market research, if you sell a product to the general public, you’ll always have the opportunity to be proven wrong. Just ask these distilleries. Contrary to their initial ideas, some of their best-selling products started life as one-off oddities whose scope, they imagined, would always be limited. Surprise! And in this case, it’s the good kind.

“Really, the decision was focused around hospitality. We figured that not everybody would want hard alcohol.”

ORPHAN GIRL When Headframe Spirits opened in Butte, Montana, in 2012, it had five products and one of those things was not like the others. “Orphan Girl was our only product below 40% alcohol. Was, and still is,” said Courtney McKee, CEO of Headframe Spirits and Headframe Spirits Manufacturing. Orphan Girl is a bourbon cream liqueur. It’s made from a blend of Headframe Spirits’ own bourbon and a cream base shelf-stabilized with neutral grain spirit. At just 17.5% alcohol, Headframe launched Orphan Girl with their inevitable spirits-tentative visitors in mind. “Really, the decision was focused around hospitality. We figured that not everybody would want hard alcohol,” said McKee. “Montana allows us to serve two ounces per person, per day, but only the alcohol we produce. We WWW.ART ISANSP IRITMAG.COM

can’t mix with booze we don’t make. This gave us a way to have something that would appeal to people who want something more approachable.” It didn’t take long before Headframe realized that Orphan Girl’s appeal was much, much broader than that. “We were open for about two weeks before we realized we’d need to place another bottle order right away,” McKee said. As a cream liqueur, Orphan Girl was the only Headframe product that used brown glass, which protects the spirit from light damage. “It was both delightful, and deeply concerning,” she said. “You don’t want to lose momentum on something successful.” She attributes the spirit’s success to three major factors. First, of course, is that it’s delicious. Second, she believes the branding, which reflects Butte’s mining heritage, taps effectively into a sense of local pride. Third, and perhaps most ineffable, was Headframe’s development of a signature cocktail featuring Orphan Girl and root beer called the ‘Dirty Girl.’ “The phrase ‘Dirty Girl’ was just so much fun,” said McKee. She said everyone, from 21-year-olds in with their parents for their first legal drink to tough-talking bikers in after a long ride, gets a chuckle from ordering a Dirty Girl. “I’ve had Hells Angels walk into the tasting room and yell ‘I need a Dirty Girl’,” laughed McKee. “And I’ve had sweet old ladies come in to buy a bottle of Orphan Girl to take home and have a Dirty Girl party with their friends. We didn’t anticipate how people would be excited and delighted by the name and the silliness.” Orphan Girl’s sales have grown every year. “It’s been tremendous, and that was real-

ly surprising to us,” said McKee. “Maybe that’s because we were conservative in our planning and because there wasn’t a lot of data to support the belief that it would be a successful product.” When Orphan Girl first launched in 2012, McKee said there weren’t many bourbon creams on the market. Buffalo Trace, a major manufacturer, even told her that they would be pulling back on their Buffalo Trace Bourbon Cream. While Orphan Girl has thrived, she said Headframe Spirits is moving slowly on launching another liqueur. “We’re always looking at ways to riff on success, but one thing we all need to be mindful of is the risk of cannibalizing on the success of the existing product,” said McKee. She said Headframe will launch another liqueur in 2020 as part of a fundraiser for Glacier National Park, but she’ll be watching Orphan Girls’ sales when that product goes live. “There’s certainly a risk that some of its success may come at the expense of Orphan Girl,” she said. “So we’re doing the research to be able to factor appropriately for any initial downturn in existing product sales.”

“When we started our distillery bar, we wanted to build out the cocktails we could make — and triple sec is used in a lot of cocktails.”

SHORT PATH TRIPLE SEC Short Path Distillery in Everett, Maryland, also had a surprise success stemming from the desire to expand their tasting room’s cocktail repertoire. “Maryland has this