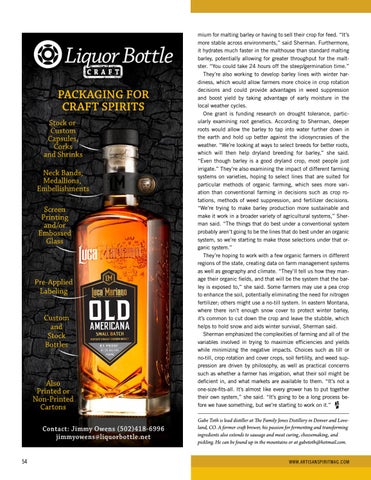 mium for malting barley or having to sell their crop for feed. “It’s more stable across environments,” said Sherman. Furthermore, it hydrates much faster in the malthouse than standard malting barley, potentially allowing for greater throughput for the maltster. “You could take 24 hours off the steep/germination time.” They’re also working to develop barley lines with winter hardiness, which would allow farmers more choice in crop rotation decisions and could provide advantages in weed suppression and boost yield by taking advantage of early moisture in the local weather cycles. One grant is funding research on drought tolerance, particularly examining root genetics. According to Sherman, deeper roots would allow the barley to tap into water further down in the earth and hold up better against the idiosyncrasies of the weather. “We’re looking at ways to select breeds for better roots, which will then help dryland breeding for barley,” she said. “Even though barley is a good dryland crop, most people just irrigate.” They’re also examining the impact of different farming systems on varieties, hoping to select lines that are suited for particular methods of organic farming, which sees more variation than conventional farming in decisions such as crop rotations, methods of weed suppression, and fertilizer decisions. “We’re trying to make barley production more sustainable and make it work in a broader variety of agricultural systems,” Sherman said. “The things that do best under a conventional system probably aren’t going to be the lines that do best under an organic system, so we’re starting to make those selections under that organic system.” They’re hoping to work with a few organic farmers in different regions of the state, creating data on farm management systems as well as geography and climate. “They’ll tell us how they manage their organic fields, and that will be the system that the barley is exposed to,” she said. Some farmers may use a pea crop to enhance the soil, potentially eliminating the need for nitrogen fertilizer; others might use a no-till system. In eastern Montana, where there isn’t enough snow cover to protect winter barley, it’s common to cut down the crop and leave the stubble, which helps to hold snow and aids winter survival, Sherman said. Sherman emphasized the complexities of farming and all of the variables involved in trying to maximize efficiencies and yields while minimizing the negative impacts. Choices such as till or no-till, crop rotation and cover crops, soil fertility, and weed suppression are driven by philosophy, as well as practical concerns such as whether a farmer has irrigation, what their soil might be deficient in, and what markets are available to them. “It’s not a one-size-fits-all. It’s almost like every grower has to put together their own system,” she said. “It’s going to be a long process before we have something, but we’re starting to work on it.” Gabe Toth is lead distiller at The Family Jones Distillery in Denver and Loveland, CO. A former craft brewer, his passion for fermenting and transforming ingredients also extends to sausage and meat curing, cheesemaking, and pickling. He can be found up in the mountains or at gabetoth@hotmail.com.