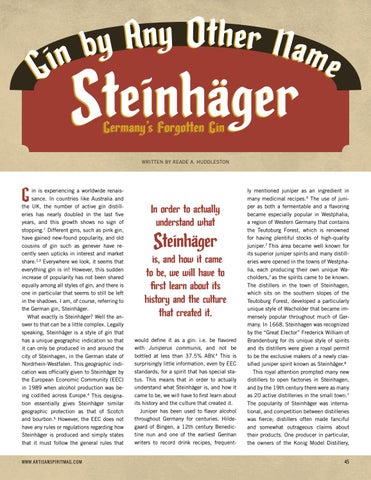 WRITTEN BY READE A. HUDDLESTON

in is experiencing a worldwide renaissance. In countries like Australia and the UK, the number of active gin distilleries has nearly doubled in the last five years, and this growth shows no sign of stopping.1 Different gins, such as pink gin, have gained new-found popularity, and old cousins of gin such as genever have recently seen upticks in interest and market share.2,3 Everywhere we look, it seems that everything gin is in! However, this sudden increase of popularity has not been shared equally among all styles of gin, and there is one in particular that seems to still be left in the shadows. I am, of course, referring to the German gin, Steinhäger. What exactly is Steinhäger? Well the answer to that can be a little complex. Legally speaking, Steinhäger is a style of gin that has a unique geographic indication so that it can only be produced in and around the city of Steinhagen, in the German state of Nordrhein-Westfalen. This geographic indication was officially given to Steinhäger by the European Economic Community (EEC) in 1989 when alcohol production was being codified across Europe.4 This designation essentially gives Steinhäger similar geographic protection as that of Scotch and bourbon.5 However, the EEC does not have any rules or regulations regarding how Steinhäger is produced and simply states that it must follow the general rules that WWW.ARTISANSPIRITMAG.COM

In order to actually understand what

ly mentioned juniper as an ingredient in many medicinal recipes.6 The use of juniper as both a fermentable and a flavoring became especially popular in Westphalia, a region of Western Germany that contains the Teutoburg Forest, which is renowned for having plentiful stocks of high-quality juniper.7 This area became well known for its superior juniper spirits and many distilleries were opened in the towns of Westphalia, each producing their own unique Wacholders,7 as the spirits came to be known. The distillers in the town of Steinhagen, which sits on the southern slopes of the Teutoburg Forest, developed a particularly unique style of Wacholder that became immensely popular throughout much of Germany. In 1668, Steinhagen was recognized by the “Great Elector” Frederick William of Brandenburg for its unique style of spirits and its distillers were given a royal permit to be the exclusive makers of a newly classified juniper spirit known as Steinhäger.8 This royal attention prompted many new distillers to open factories in Steinhagen, and by the 19th century there were as many as 20 active distilleries in the small town.7 The popularity of Steinhäger was international, and competition between distilleries was fierce; distillers often made fanciful and somewhat outrageous claims about their products. One producer in particular, the owners of the Konig Model Distillery,