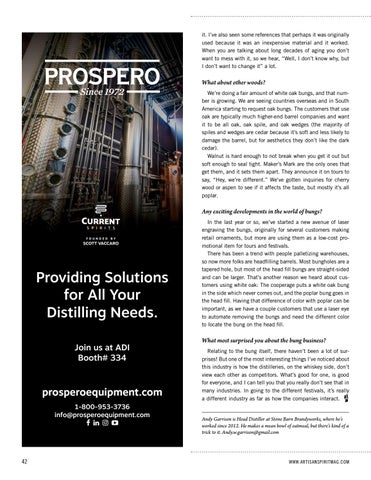 it. I’ve also seen some references that perhaps it was originally used because it was an inexpensive material and it worked. When you are talking about long decades of aging you don’t want to mess with it, so we hear, “Well, I don’t know why, but I don’t want to change it” a lot.

What about other woods? We’re doing a fair amount of white oak bungs, and that number is growing. We are seeing countries overseas and in South America starting to request oak bungs. The customers that use oak are typically much higher-end barrel companies and want it to be all oak, oak spile, and oak wedges (the majority of spiles and wedges are cedar because it’s soft and less likely to damage the barrel, but for aesthetics they don’t like the dark cedar). Walnut is hard enough to not break when you get it out but soft enough to seal tight. Maker’s Mark are the only ones that get them, and it sets them apart. They announce it on tours to say, “Hey, we’re different.” We’ve gotten inquiries for cherry wood or aspen to see if it affects the taste, but mostly it’s all poplar.

Any exciting developments in the world of bungs?

Providing Solutions for All Your Distilling Needs. Join us at ADI Booth# 334

In the last year or so, we’ve started a new avenue of laser engraving the bungs, originally for several customers making retail ornaments, but more are using them as a low-cost promotional item for tours and festivals. There has been a trend with people palletizing warehouses, so now more folks are headfilling barrels. Most bungholes are a tapered hole, but most of the head fill bungs are straight-sided and can be larger. That’s another reason we heard about customers using white oak: The cooperage puts a white oak bung in the side which never comes out, and the poplar bung goes in the head fill. Having that difference of color with poplar can be important, as we have a couple customers that use a laser eye to automate removing the bungs and need the different color to locate the bung on the head fill.

What most surprised you about the bung business? Relating to the bung itself, there haven’t been a lot of surprises! But one of the most interesting things I’ve noticed about this industry is how the distilleries, on the whiskey side, don’t view each other as competitors. What’s good for one, is good for everyone, and I can tell you that you really don’t see that in many industries. In going to the different festivals, it’s really a different industry as far as how the companies interact.

Andy Garrison is Head Distiller at Stone Barn Brandyworks, where he’s worked since 2012. He makes a mean bowl of oatmeal, but there’s kind of a trick to it. Andy.w.garrison@gmail.com