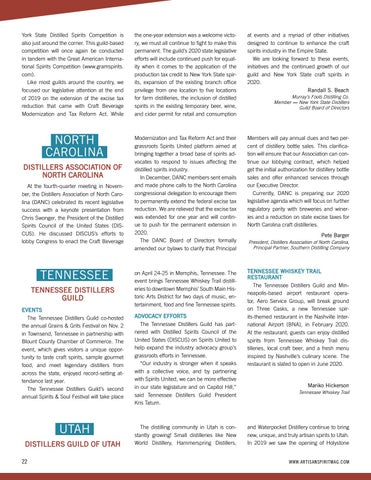 York State Distilled Spirits Competition is also just around the corner. This guild-based competition will once again be conducted in tandem with the Great American International Spirits Competition (www.gramspirits. com). Like most guilds around the country, we focused our legislative attention at the end of 2019 on the extension of the excise tax reduction that came with Craft Beverage Modernization and Tax Reform Act. While

NORTH CAROLINA DISTILLERS ASSOCIATION OF NORTH CAROLINA At the fourth-quarter meeting in November, the Distillers Association of North Carolina (DANC) celebrated its recent legislative success with a keynote presentation from Chris Swonger, the President of the Distilled Spirits Council of the United States (DISCUS). He discussed DISCUS’s efforts to lobby Congress to enact the Craft Beverage

the one-year extension was a welcome victory, we must all continue to fight to make this permanent. The guild’s 2020 state legislative efforts will include continued push for equality when it comes to the application of the production tax credit to New York State spirits, expansion of the existing branch office privilege from one location to five locations for farm distilleries, the inclusion of distilled spirits in the existing temporary beer, wine, and cider permit for retail and consumption

at events and a myriad of other initiatives designed to continue to enhance the craft spirits industry in the Empire State. We are looking forward to these events, initiatives and the continued growth of our guild and New York State craft spirits in 2020. Randall S. Beach

Modernization and Tax Reform Act and their grassroots Spirits United platform aimed at bringing together a broad base of spirits advocates to respond to issues affecting the distilled spirits industry. In December, DANC members sent emails and made phone calls to the North Carolina congressional delegation to encourage them to permanently extend the federal excise tax reduction. We are relieved that the excise tax was extended for one year and will continue to push for the permanent extension in 2020. The DANC Board of Directors formally amended our bylaws to clarify that Principal

Members will pay annual dues and two percent of distillery bottle sales. This clarification will ensure that our Association can continue our lobbying contract, which helped get the initial authorization for distillery bottle sales and offer enhanced services through our Executive Director. Currently, DANC is preparing our 2020 legislative agenda which will focus on further regulatory parity with breweries and wineries and a reduction on state excise taxes for North Carolina craft distilleries.

ADVOCACY EFFORTS The Tennessee Distillers Guild has partnered with Distilled Spirits Council of the United States (DISCUS) on Spirits United to help expand the industry advocacy group’s grassroots efforts in Tennessee. “Our industry is stronger when it speaks with a collective voice, and by partnering with Spirits United, we can be more effective in our state legislature and on Capitol Hill,” said Tennessee Distillers Guild President Kris Tatum.

and Waterpocket Distillery continue to bring new, unique, and truly artisan spirits to Utah. In 2019 we saw the opening of Holystone WWW.ARTISANSPIRITMAG.COM