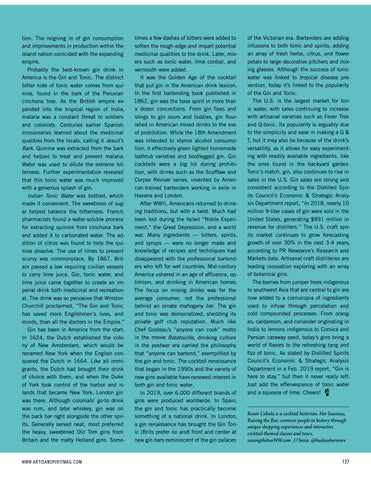 tion. The reigning in of gin consumption and improvements in production within the island nation coincided with the expanding empire. Probably the best-known gin drink in America is the Gin and Tonic. The distinct bitter note of tonic water comes from quinine, found in the bark of the Peruvian cinchona tree. As the British empire expanded into the tropical region of India, malaria was a constant threat to soldiers and colonists. Centuries earlier Spanish missionaries learned about the medicinal qualities from the locals, calling it Jesuit’s Bark. Quinine was extracted from the bark and helped to treat and prevent malaria. Water was used to dilute the extreme bitterness. Further experimentation revealed that this tonic water was much improved with a generous splash of gin. Indian Tonic Water was bottled, which made it convenient. The sweetness of sugar helped balance the bitterness. French pharmacists found a water-soluble process for extracting quinine from cinchona bark and added it to carbonated water. The addition of citrus was found to help the quinine dissolve. The use of limes to prevent scurvy was commonplace. By 1867, Britain passed a law requiring civilian vessels to carry lime juice. Gin, tonic water, and lime juice came together to create an imperial drink both medicinal and recreational. The drink was so pervasive that Winston Churchill proclaimed, “The Gin and Tonic has saved more Englishmen’s lives, and minds, than all the doctors in the Empire.” Gin has been in America from the start. In 1624, the Dutch established the colony of New Amsterdam, which would be renamed New York when the English conquered the Dutch in 1664. Like all immigrants, the Dutch had brought their drink of choice with them, and when the Duke of York took control of the harbor and islands that became New York, London gin was there. Although colonials’ go-to drink was rum, and later whiskey, gin was on the back bar right alongside the other spirits. Generally served neat, most preferred the heavy, sweetened Old Tom gins from Britain and the malty Holland gins. Some-

times a few dashes of bitters were added to soften the rough edge and impart potential medicinal qualities to the drink. Later, mixers such as tonic water, lime cordial, and vermouth were added. It was the Golden Age of the cocktail that put gin in the American drink lexicon. In the first bartending book published in 1862, gin was the base spirit in more than a dozen concoctions. From gin fixes and slings to gin sours and toddies, gin flourished in American mixed drinks to the eve of prohibition. While the 18th Amendment was intended to stymie alcohol consumption, it effectively green lighted homemade bathtub varieties and bootlegged gin. Gin cocktails were a big hit during prohibition, with drinks such as the Scofflaw and Corpse Reviver series, invented by American-trained bartenders working in exile in Havana and London. After WWII, Americans returned to drinking traditions, but with a twist. Much had been lost during the failed “Noble Experiment,” the Great Depression, and a world war. Many ingredients — bitters, spirits, and syrups — were no longer made and knowledge of recipes and techniques had disappeared with the professional bartenders who left for wet countries. Mid-century America ushered in an age of affluence, optimism, and drinking in American homes. The focus on mixing drinks was for the average consumer, not the professional behind an ornate mahogany bar. The gin and tonic was democratized, shedding its private golf club reputation. Much like Chef Gusteau’s “anyone can cook” motto in the movie Ratatouille, drinking culture in the postwar era carried the philosophy that “anyone can bartend,” exemplified by the gin and tonic. The cocktail renaissance that began in the 1990s and the variety of new gins available have renewed interest in both gin and tonic water. In 2019, over 6,000 different brands of gins were produced worldwide. In Spain, the gin and tonic has practically become something of a national drink. In London, a gin renaissance has brought the Gin Tonic (Brits prefer no and) front and center at new gin bars reminiscent of the gin palaces

of the Victorian era. Bartenders are adding infusions to both tonic and spirits, adding an array of fresh herbs, citrus, and flower petals to large decorative pitchers and mixing glasses. Although the success of tonic water was linked to tropical disease prevention, today it’s linked to the popularity of the Gin and Tonic. The U.S. is the largest market for tonic water, with sales continuing to increase with artisanal varieties such as Fever Tree and Q-tonic. Its popularity is arguably due to the simplicity and ease in making a G & T, but it may also be because of the drink’s versatility, as it allows for easy experimenting with readily available ingredients, like the ones found in the backyard garden. Tonic’s match, gin, also continues to rise in sales in the U.S. Gin sales are strong and consistent according to the Distilled Spirits Council’s Economic & Strategic Analysis Department report, “In 2018, nearly 10 million 9-liter cases of gin were sold in the United States, generating $891 million in revenue for distillers.” The U.S. craft spirits market continues to grow forecasting growth of over 30% in the next 3-4 years, according to PR Newswire’s Research and Markets data. Artisanal craft distilleries are leading innovation exploring with an array of botanical gins. The berries from juniper trees indigenous to southwest Asia that are central to gin are now added to a cornucopia of ingredients used to infuse through percolation and cold compounded processes. From oranges, cardamom, and coriander originating in India to lemons indigenous to Corsica and Persian caraway seed, today’s gins bring a world of flavors to the refreshing tang and fizz of tonic. As stated by Distilled Spirits Council’s Economic & Strategic Analysis Department in a Feb. 2019 report, “Gin is here to stay,” but then it never really left. Just add the effervescence of tonic water and a squeeze of lime. Cheers!