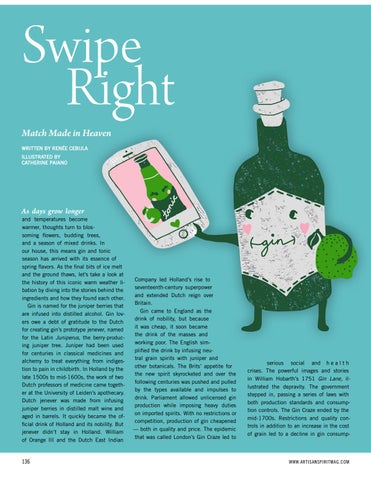 and temperatures become warmer, thoughts turn to blossoming flowers, budding trees, and a season of mixed drinks. In our house, this means gin and tonic season has arrived with its essence of spring flavors. As the final bits of ice melt and the ground thaws, let’s take a look at the history of this iconic warm weather libation by diving into the stories behind the ingredients and how they found each other. Gin is named for the juniper berries that are infused into distilled alcohol. Gin lovers owe a debt of gratitude to the Dutch for creating gin’s prototype jenever, named for the Latin Juniperus, the berry-producing juniper tree. Juniper had been used for centuries in classical medicines and alchemy to treat everything from indigestion to pain in childbirth. In Holland by the late 1500s to mid-1600s, the work of two Dutch professors of medicine came together at the University of Leiden’s apothecary. Dutch jenever was made from infusing juniper berries in distilled malt wine and aged in barrels. It quickly became the official drink of Holland and its nobility. But jenever didn’t stay in Holland. William of Orange III and the Dutch East Indian

Company led Holland’s rise to seventeenth-century superpower and extended Dutch reign over Britain. Gin came to England as the drink of nobility, but because it was cheap, it soon became the drink of the masses and working poor. The English simplified the drink by infusing neutral grain spirits with juniper and other botanicals. The Brits’ appetite for the new spirit skyrocketed and over the following centuries was pushed and pulled by the types available and impulses to drink. Parliament allowed unlicensed gin production while imposing heavy duties on imported spirits. With no restrictions or competition, production of gin cheapened — both in quality and price. The epidemic that was called London’s Gin Craze led to

serious social and h e a l t h crises. The powerful images and stories in William Hobarth’s 1751 Gin Lane, illustrated the depravity. The government stepped in, passing a series of laws with both production standards and consumption controls. The Gin Craze ended by the mid-1700s. Restrictions and quality controls in addition to an increase in the cost of grain led to a decline in gin consump-