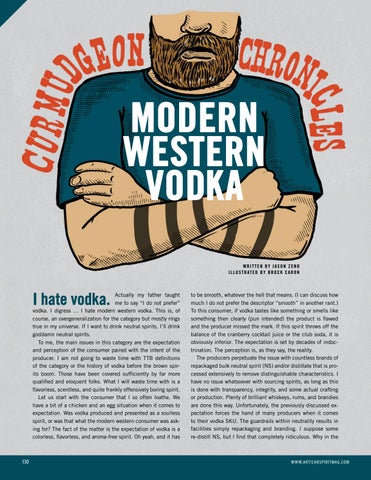 Actually my father taught me to say “I do not prefer” vodka. I digress … I hate modern western vodka. This is, of course, an overgeneralization for the category but mostly rings true in my universe. If I want to drink neutral spirits, I’ll drink goddamn neutral spirits. To me, the main issues in this category are the expectation and perception of the consumer paired with the intent of the producer. I am not going to waste time with TTB definitions of the category or the history of vodka before the brown spirits boom. Those have been covered sufficiently by far more qualified and eloquent folks. What I will waste time with is a flavorless, scentless, and quite frankly offensively boring spirit. Let us start with the consumer that I so often loathe. We have a bit of a chicken and an egg situation when it comes to expectation. Was vodka produced and presented as a soulless spirit, or was that what the modern western consumer was asking for? The fact of the matter is the expectation of vodka is a colorless, flavorless, and aroma-free spirit. Oh yeah, and it has

to be smooth, whatever the hell that means. (I can discuss how much I do not prefer the descriptor “smooth” in another rant.) To this consumer, if vodka tastes like something or smells like something then clearly (pun intended) the product is flawed and the producer missed the mark. If this spirit throws off the balance of the cranberry cocktail juice or the club soda, it is obviously inferior. The expectation is set by decades of indoctrination. The perception is, as they say, the reality. The producers perpetuate the issue with countless brands of repackaged bulk neutral spirit (NS) and/or distillate that is processed extensively to remove distinguishable characteristics. I have no issue whatsoever with sourcing spirits, as long as this is done with transparency, integrity, and some actual crafting or production. Plenty of brilliant whiskeys, rums, and brandies are done this way. Unfortunately, the previously discussed expectation forces the hand of many producers when it comes to their vodka SKU. The guardrails within neutrality results in facilities simply repackaging and branding. I suppose some re-distill NS, but I find that completely ridiculous. Why in the