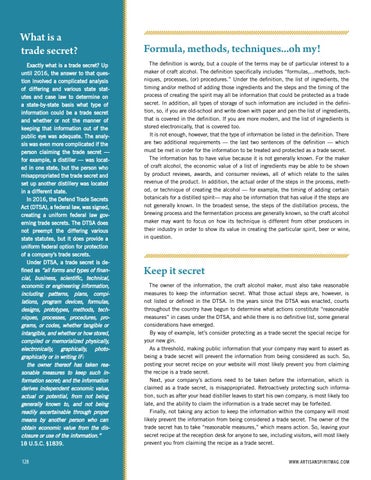 What is a trade secret? Exactly what is a trade secret? Up until 2016, the answer to that question involved a complicated analysis of differing and various state statutes and case law to determine on a state-by-state basis what type of information could be a trade secret and whether or not the manner of keeping that information out of the public eye was adequate. The analysis was even more complicated if the person claiming the trade secret — for example, a distiller — was located in one state, but the person who misappropriated the trade secret and set up another distillery was located in a different state. In 2016, the Defend Trade Secrets Act (DTSA), a federal law, was signed, creating a uniform federal law governing trade secrets. The DTSA does not preempt the differing various state statutes, but it does provide a uniform federal option for protection of a company’s trade secrets. Under DTSA, a trade secret is defined as “all forms and types of financial, business, scientific, technical, economic or engineering information, including patterns, plans, compilations, program devices, formulas, designs, prototypes, methods, techniques, processes, procedures, programs, or codes, whether tangible or intangible, and whether or how stored, compiled or memorialized physically, electronically, graphically, photographically or in writing IF: the owner thereof has taken reasonable measures to keep such information secret; and the information derives independent economic value, actual or potential, from not being generally known to, and not being readily ascertainable through proper means by another person who can obtain economic value from the disclosure or use of the information.”  18 U.S.C. §1839.

Formula, methods, techniques...oh my! The definition is wordy, but a couple of the terms may be of particular interest to a maker of craft alcohol. The definition specifically includes “formulas,...methods, techniques, processes, (or) procedures.” Under the definition, the list of ingredients, the timing and/or method of adding those ingredients and the steps and the timing of the process of creating the spirit may all be information that could be protected as a trade secret. In addition, all types of storage of such information are included in the definition, so, if you are old-school and write down with paper and pen the list of ingredients, that is covered in the definition. If you are more modern, and the list of ingredients is stored electronically, that is covered too. It is not enough, however, that the type of information be listed in the definition. There are two additional requirements — the last two sentences of the definition — which must be met in order for the information to be treated and protected as a trade secret. The information has to have value because it is not generally known. For the maker of craft alcohol, the economic value of a list of ingredients may be able to be shown by product reviews, awards, and consumer reviews, all of which relate to the sales revenue of the product. In addition, the actual order of the steps in the process, method, or technique of creating the alcohol — for example, the timing of adding certain botanicals for a distilled spirit— may also be information that has value if the steps are not generally known. In the broadest sense, the steps of the distillation process, the brewing process and the fermentation process are generally known, so the craft alcohol maker may want to focus on how its technique is different from other producers in their industry in order to show its value in creating the particular spirit, beer or wine, in question.