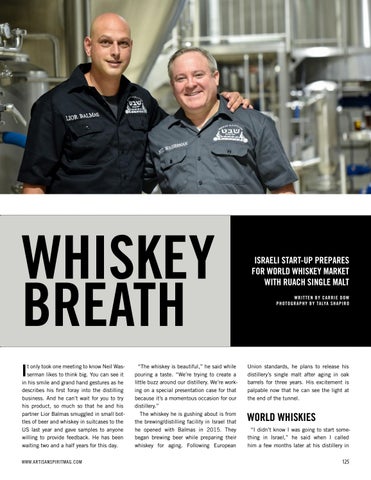 t only took one meeting to know Neil Wasserman likes to think big. You can see it in his smile and grand hand gestures as he describes his first foray into the distilling business. And he can’t wait for you to try his product, so much so that he and his partner Lior Balmas smuggled in small bottles of beer and whiskey in suitcases to the US last year and gave samples to anyone willing to provide feedback. He has been waiting two and a half years for this day.

“The whiskey is beautiful,” he said while pouring a taste. “We’re trying to create a little buzz around our distillery. We’re working on a special presentation case for that because it’s a momentous occasion for our distillery.” The whiskey he is gushing about is from the brewing/distilling facility in Israel that he opened with Balmas in 2015. They began brewing beer while preparing their whiskey for aging. Following European

Union standards, he plans to release his distillery’s single malt after aging in oak barrels for three years. His excitement is palpable now that he can see the light at the end of the tunnel.

WORLD WHISKIES “I didn’t know I was going to start something in Israel,” he said when I called him a few months later at his distillery in