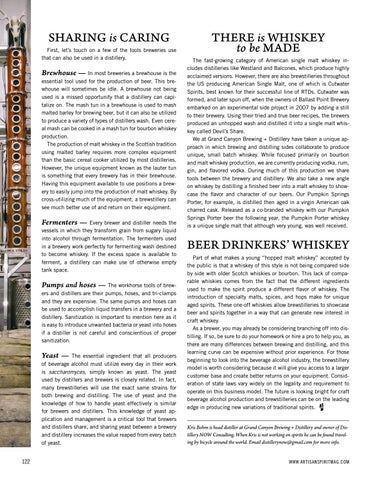 SHARING is CARING First, let’s touch on a few of the tools breweries use that can also be used in a distillery.

Brewhouse — In most breweries a brewhouse is the

essential tool used for the production of beer. This brewhouse will sometimes be idle. A brewhouse not being used is a missed opportunity that a distillery can capitalize on. The mash tun in a brewhouse is used to mash malted barley for brewing beer, but it can also be utilized to produce a variety of types of distillers wash. Even cereal mash can be cooked in a mash tun for bourbon whiskey production. The production of malt whiskey in the Scottish tradition using malted barley requires more complex equipment than the basic cereal cooker utilized by most distilleries. However, the unique equipment known as the lauter tun is something that every brewery has in their brewhouse. Having this equipment available to use positions a brewery to easily jump into the production of malt whiskey. By cross-utilizing much of the equipment, a brewstillery can see much better use of and return on their equipment.

Fermenters — Every brewer and distiller needs the vessels in which they transform grain from sugary liquid into alcohol through fermentation. The fermenters used in a brewery work perfectly for fermenting wash destined to become whiskey. If the excess space is available to ferment, a distillery can make use of otherwise empty tank space. Pumps and hoses — The workhorse tools of brewers and distillers are their pumps, hoses, and tri-clamps and they are expensive. The same pumps and hoses can be used to accomplish liquid transfers in a brewery and a distillery. Sanitization is important to mention here as it is easy to introduce unwanted bacteria or yeast into hoses if a distiller is not careful and conscientious of proper sanitization. Yeast — The essential ingredient that all producers of beverage alcohol must utilize every day in their work is saccharomyces, simply known as yeast. The yeast used by distillers and brewers is closely related. In fact, many brewstilleries will use the exact same strains for both brewing and distilling. The use of yeast and the knowledge of how to handle yeast effectively is similar for brewers and distillers. This knowledge of yeast application and management is a critical tool that brewers and distillers share, and sharing yeast between a brewery and distillery increases the value reaped from every batch of yeast. 122

THERE is WHISKEY to be MADE The fast-growing category of American single malt whiskey includes distilleries like Westland and Balcones, which produce highly acclaimed versions. However, there are also brewstilleries throughout the US producing American Single Malt, one of which is Cutwater Spirits, best known for their successful line of RTDs. Cutwater was formed, and later spun off, when the owners of Ballast Point Brewery embarked on an experimental side project in 2007 by adding a still to their brewery. Using their tried and true beer recipes, the brewers produced an unhopped wash and distilled it into a single malt whiskey called Devil’s Share. We at Grand Canyon Brewing + Distillery have taken a unique approach in which brewing and distilling sides collaborate to produce unique, small batch whiskey. While focused primarily on bourbon and malt whiskey production, we are currently producing vodka, rum, gin, and flavored vodka. During much of this production we share tools between the brewery and distillery. We also take a new angle on whiskey by distilling a finished beer into a malt whiskey to showcase the flavor and character of our beers. Our Pumpkin Springs Porter, for example, is distilled then aged in a virgin American oak charred cask. Released as a co-branded whiskey with our Pumpkin Springs Porter beer the following year, the Pumpkin Porter whiskey is a unique single malt that although very young, was well received.

BEER DRINKERS’ WHISKEY Part of what makes a young “hopped malt whiskey” accepted by the public is that a whiskey of this style is not being compared side by side with older Scotch whiskies or bourbon. This lack of comparable whiskies comes from the fact that the different ingredients used to make the spirit produce a different flavor of whiskey. The introduction of specialty malts, spices, and hops make for unique aged spirits. These one-off whiskies allow brewstilleries to showcase beer and spirits together in a way that can generate new interest in craft whiskey. As a brewer, you may already be considering branching off into distilling. If so, be sure to do your homework or hire a pro to help you, as there are many differences between brewing and distilling, and this learning curve can be expensive without prior experience. For those beginning to look into the beverage alcohol industry, the brewstillery model is worth considering because it will give you access to a larger customer base and create better returns on your equipment. Consideration of state laws vary widely on the legality and requirement to operate on this business model. The future is looking bright for craft beverage alcohol production and brewstilleries can be on the leading edge in producing new variations of traditional spirits.

Kris Bohm is head distiller at Grand Canyon Brewing + Distillery and owner of Distillery NOW Consulting. When Kris is not working on spirits he can be found traveling by bicycle around the world. Email distillerynow@gmail.com for more info. WWW.ARTISANSPIRITMAG.COM