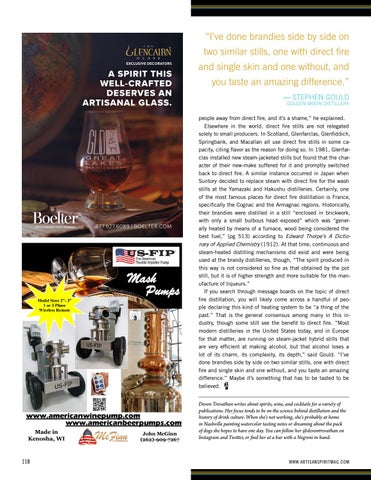 “I’ve done brandies side by side on two similar stills, one with direct fire EXCLUSIVE DECORATORS

A SPIRIT THIS WELL-CRAFTED DESERVES AN ARTISANAL GLASS.

and single skin and one without, and you taste an amazing difference.” — STEPHEN GOULD

people away from direct fire, and it’s a shame,” he explained. Elsewhere in the world, direct fire stills are not relegated solely to small producers. In Scotland, Glenfarclas, Glenfiddich, Springbank, and Macallan all use direct fire stills in some capacity, citing flavor as the reason for doing so. In 1981, Glenfarclas installed new steam-jacketed stills but found that the character of their new-make suffered for it and promptly switched back to direct fire. A similar instance occurred in Japan when Suntory decided to replace steam with direct fire for the wash stills at the Yamazaki and Hakushu distilleries. Certainly, one of the most famous places for direct fire distillation is France, specifically the Cognac and the Armagnac regions. Historically, their brandies were distilled in a still “enclosed in brickwork, with only a small bulbous head exposed” which was “generally heated by means of a furnace, wood being considered the best fuel,” (pg 513) according to Edward Thorpe’s A Dictionary of Applied Chemistry (1912). At that time, continuous and steam-heated distilling mechanisms did exist and were being 12:48 PMused at the brandy distilleries, though, “The spirit produced in this way is not considered so fine as that obtained by the pot still, but it is of higher strength and more suitable for the manufacture of liqueurs.” If you search through message boards on the topic of direct fire distillation, you will likely come across a handful of people declaring this kind of heating system to be “a thing of the past.” That is the general consensus among many in this industry, though some still see the benefit to direct fire. “Most modern distilleries in the United States today, and in Europe for that matter, are running on steam-jacket hybrid stills that are very efficient at making alcohol, but that alcohol loses a lot of its charm, its complexity, its depth,” said Gould. “I’ve done brandies side by side on two similar stills, one with direct fire and single skin and one without, and you taste an amazing difference.” Maybe it’s something that has to be tasted to be believed. Devon Trevathan writes about spirits, wine, and cocktails for a variety of publications. Her focus tends to be on the science behind distillation and the history of drink culture. When she’s not working, she’s probably at home in Nashville painting watercolor tasting notes or dreaming about the pack of dogs she hopes to have one day. You can follow her @devontrevathan on Instagram and Twitter, or find her at a bar with a Negroni in hand.