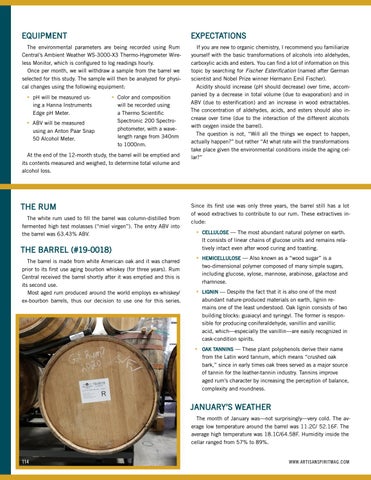 The environmental parameters are being recorded using Rum Central’s Ambient Weather WS-3000-X3 Thermo-Hygrometer Wireless Monitor, which is configured to log readings hourly. Once per month, we will withdraw a sample from the barrel we selected for this study. The sample will then be analyzed for physical changes using the following equipment:

If you are new to organic chemistry, I recommend you familiarize yourself with the basic transformations of alcohols into aldehydes, carboxylic acids and esters. You can find a lot of information on this topic by searching for Fischer Esterification (named after German scientist and Nobel Prize winner Hermann Emil Fischer). Acidity should increase (pH should decrease) over time, accompanied by a decrease in total volume (due to evaporation) and in ABV (due to esterification) and an increase in wood extractables. The concentration of aldehydes, acids, and esters should also increase over time (due to the interaction of the different alcohols with oxygen inside the barrel). The question is not, “Will all the things we expect to happen, actually happen?” but rather “At what rate will the transformations take place given the environmental conditions inside the aging cellar?”

will be recorded using a Thermo Scientific Spectronic 200 Spectrophotometer, with a wavelength range from 340nm to 1000nm.

At the end of the 12-month study, the barrel will be emptied and its contents measured and weighed, to determine total volume and alcohol loss.

THE RUM The white rum used to fill the barrel was column-distilled from fermented high test molasses (“miel virgen”). The entry ABV into the barrel was 63.43% ABV.

Since its first use was only three years, the barrel still has a lot of wood extractives to contribute to our rum. These extractives include:

CELLULOSE — The most abundant natural polymer on earth. It consists of linear chains of glucose units and remains relatively intact even after wood curing and toasting.

HEMICELLULOSE — Also known as a “wood sugar” is a

THE BARREL (#19-0018) The barrel is made from white American oak and it was charred prior to its first use aging bourbon whiskey (for three years). Rum Central received the barrel shortly after it was emptied and this is its second use. Most aged rum produced around the world employs ex-whiskey/ ex-bourbon barrels, thus our decision to use one for this series.

LIGNIN — Despite the fact that it is also one of the most abundant nature-produced materials on earth, lignin remains one of the least understood. Oak lignin consists of two building blocks: guaiacyl and syringyl. The former is responsible for producing coniferaldehyde, vanillin and vanillic acid, which—especially the vanillin—are easily recognized in cask-condition spirits.

from the Latin word tannum, which means “crushed oak bark,” since in early times oak trees served as a major source of tannin for the leather-tannin industry. Tannins improve aged rum’s character by increasing the perception of balance, complexity and roundness.

JANUARY’S WEATHER The month of January was—not surprisingly—very cold. The average low temperature around the barrel was 11.2C/ 52.16F. The average high temperature was 18.1C/64.58F. Humidity inside the cellar ranged from 57% to 89%.