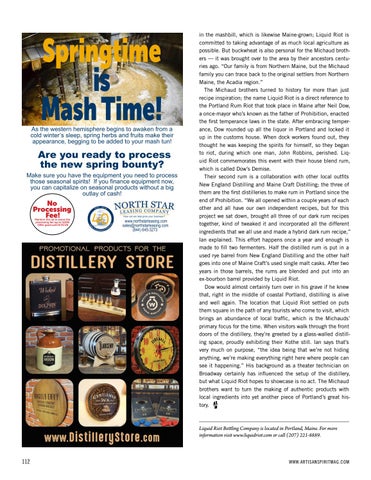 As the western hemisphere begins to awaken from a cold winter’s sleep, spring herbs and fruits make their appearance, begging to be added to your mash tun!

Are you ready to process the new spring bounty? Make sure you have the equipment you need to process those seasonal spirits! If you finance equipment now, you can capitalize on seasonal products without a big outlay of cash!

in the mashbill, which is likewise Maine-grown; Liquid Riot is committed to taking advantage of as much local agriculture as possible. But buckwheat is also personal for the Michaud brothers — it was brought over to the area by their ancestors centuries ago. “Our family is from Northern Maine, but the Michaud family you can trace back to the original settlers from Northern Maine, the Acadia region.” The Michaud brothers turned to history for more than just recipe inspiration; the name Liquid Riot is a direct reference to the Portland Rum Riot that took place in Maine after Neil Dow, a once-mayor who’s known as the father of Prohibition, enacted the first temperance laws in the state. After embracing temperance, Dow rounded up all the liquor in Portland and locked it up in the customs house. When dock workers found out, they thought he was keeping the spirits for himself, so they began to riot, during which one man, John Robbins, perished. Liquid Riot commemorates this event with their house blend rum, which is called Dow’s Demise. Their second rum is a collaboration with other local outfits New England Distilling and Maine Craft Distilling; the three of them are the first distilleries to make rum in Portland since the end of Prohibition. “We all opened within a couple years of each other and all have our own independent recipes, but for this project we sat down, brought all three of our dark rum recipes together, kind of tweaked it and incorporated all the different ingredients that we all use and made a hybrid dark rum recipe,” Ian explained. This effort happens once a year and enough is made to fill two fermenters. Half the distilled rum is put in a used rye barrel from New England Distilling and the other half goes into one of Maine Craft’s used single malt casks. After two years in those barrels, the rums are blended and put into an ex-bourbon barrel provided by Liquid Riot. Dow would almost certainly turn over in his grave if he knew that, right in the middle of coastal Portland, distilling is alive and well again. The location that Liquid Riot settled on puts them square in the path of any tourists who come to visit, which brings an abundance of local traffic, which is the Michauds’ primary focus for the time. When visitors walk through the front doors of the distillery, they’re greeted by a glass-walled distilling space, proudly exhibiting their Kothe still. Ian says that’s very much on purpose, “the idea being that we’re not hiding anything, we’re making everything right here where people can see it happening.” His background as a theater technician on Broadway certainly has influenced the setup of the distillery, but what Liquid Riot hopes to showcase is no act. The Michaud brothers want to turn the making of authentic products with local ingredients into yet another piece of Portland’s great history.