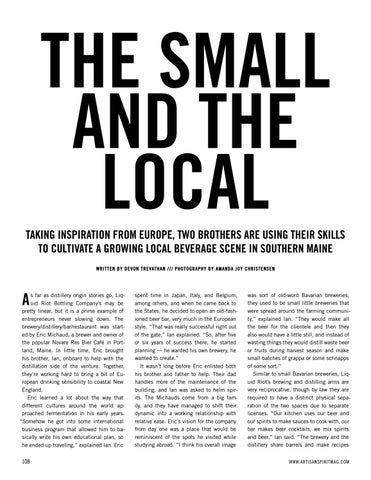 s far as distillery origin stories go, Liquid Riot Bottling Company’s may be pretty linear, but it is a prime example of entrepreneurs never slowing down. The brewery/distillery/bar/restaurant was started by Eric Michaud, a brewer and owner of the popular Novare Res Bier Café in Portland, Maine. In little time, Eric brought his brother, Ian, onboard to help with the distillation side of the venture. Together, they’re working hard to bring a bit of European drinking sensibility to coastal New England. Eric learned a lot about the way that different cultures around the world approached fermentation in his early years. “Somehow he got into some international business program that allowed him to basically write his own educational plan, so he ended up traveling,” explained Ian. Eric

spent time in Japan, Italy, and Belgium, among others, and when he came back to the States, he decided to open an old-fashioned beer bar, very much in the European style. “That was really successful right out of the gate,” Ian explained. “So, after five or six years of success there, he started planning — he wanted his own brewery, he wanted to create.” It wasn’t long before Eric enlisted both his brother and father to help. Their dad handles more of the maintenance of the building, and Ian was asked to helm spirits. The Michauds come from a big family, and they have managed to shift their dynamic into a working relationship with relative ease. Eric’s vision for the company from day one was a place that would be reminiscent of the spots he visited while studying abroad. “I think his overall image

was sort of old-word Bavarian breweries; they used to be small little breweries that were spread around the farming community,” explained Ian. “They would make all the beer for the clientele and then they also would have a little still, and instead of wasting things they would distill waste beer or fruits during harvest season and make small batches of grappa or some schnapps of some sort.” Similar to small Bavarian breweries, Liquid Riot’s brewing and distilling arms are very reciprocative, though by law they are required to have a distinct physical separation of the two spaces due to separate licenses. “Our kitchen uses our beer and our spirits to make sauces to cook with, our bar makes beer cocktails, we mix spirits and beer,” Ian said. “The brewery and the distillery share barrels and make recipes WWW.ARTISANSPIRITMAG.COM