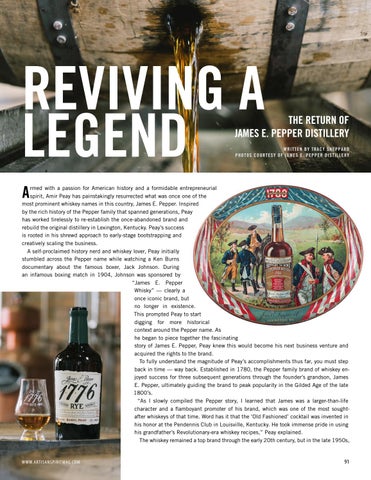 rmed with a passion for American history and a formidable entrepreneurial spirit, Amir Peay has painstakingly resurrected what was once one of the most prominent whiskey names in this country, James E. Pepper. Inspired by the rich history of the Pepper family that spanned generations, Peay has worked tirelessly to re-establish the once-abandoned brand and rebuild the original distillery in Lexington, Kentucky. Peay’s success is rooted in his shrewd approach to early-stage bootstrapping and creatively scaling the business. A self-proclaimed history nerd and whiskey lover, Peay initially stumbled across the Pepper name while watching a Ken Burns documentary about the famous boxer, Jack Johnson. During an infamous boxing match in 1904, Johnson was sponsored by “James E. Pepper Whisky” — clearly a once iconic brand, but no longer in existence. This prompted Peay to start digging for more historical context around the Pepper name. As he began to piece together the fascinating story of James E. Pepper, Peay knew this would become his next business venture and acquired the rights to the brand. To fully understand the magnitude of Peay’s accomplishments thus far, you must step back in time — way back. Established in 1780, the Pepper family brand of whiskey enjoyed success for three subsequent generations through the founder’s grandson, James E. Pepper, ultimately guiding the brand to peak popularity in the Gilded Age of the late 1800’s. “As I slowly compiled the Pepper story, I learned that James was a larger-than-life character and a flamboyant promoter of his brand, which was one of the most soughtafter whiskeys of that time. Word has it that the ‘Old Fashioned’ cocktail was invented in his honor at the Pendennis Club in Louisville, Kentucky. He took immense pride in using his grandfather’s Revolutionary-era whiskey recipes,” Peay explained. The whiskey remained a top brand through the early 20th century, but in the late 1950s,