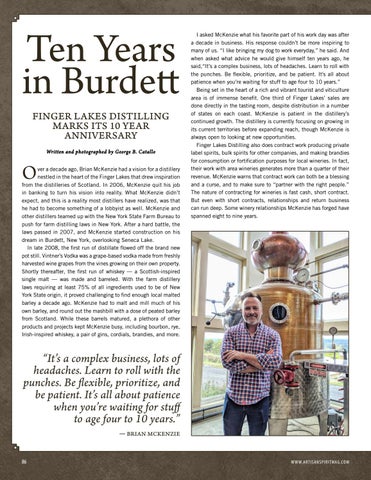 ver a decade ago, Brian McKenzie had a vision for a distillery nestled in the heart of the Finger Lakes that drew inspiration from the distilleries of Scotland. In 2006, McKenzie quit his job in banking to turn his vision into reality. What McKenzie didn’t expect, and this is a reality most distillers have realized, was that he had to become something of a lobbyist as well. McKenzie and other distillers teamed up with the New York State Farm Bureau to push for farm distilling laws in New York. After a hard battle, the laws passed in 2007, and McKenzie started construction on his dream in Burdett, New York, overlooking Seneca Lake. In late 2008, the first run of distillate flowed off the brand new pot still. Vintner’s Vodka was a grape-based vodka made from freshly harvested wine grapes from the vines growing on their own property. Shortly thereafter, the first run of whiskey — a Scottish-inspired single malt — was made and barreled. With the farm distillery laws requiring at least 75% of all ingredients used to be of New York State origin, it proved challenging to find enough local malted barley a decade ago. McKenzie had to malt and mill much of his own barley, and round out the mashbill with a dose of peated barley from Scotland. While these barrels matured, a plethora of other products and projects kept McKenzie busy, including bourbon, rye, Irish-inspired whiskey, a pair of gins, cordials, brandies, and more.

I asked McKenzie what his favorite part of his work day was after a decade in business. His response couldn’t be more inspiring to many of us. “I like bringing my dog to work everyday,” he said. And when asked what advice he would give himself ten years ago, he said,“It’s a complex business, lots of headaches. Learn to roll with the punches. Be flexible, prioritize, and be patient. It’s all about patience when you’re waiting for stuff to age four to 10 years.” Being set in the heart of a rich and vibrant tourist and viticulture area is of immense benefit. One third of Finger Lakes’ sales are done directly in the tasting room, despite distribution in a number of states on each coast. McKenzie is patient in the distillery’s continued growth. The distillery is currently focusing on growing in its current territories before expanding reach, though McKenzie is always open to looking at new opportunities. Finger Lakes Distilling also does contract work producing private label spirits, bulk spirits for other companies, and making brandies for consumption or fortification purposes for local wineries. In fact, their work with area wineries generates more than a quarter of their revenue. McKenzie warns that contract work can both be a blessing and a curse, and to make sure to “partner with the right people.” The nature of contracting for wineries is fast cash, short contract. But even with short contracts, relationships and return business can run deep. Some winery relationships McKenzie has forged have spanned eight to nine years.

“It’s a complex business, lots of headaches. Learn to roll with the punches. Be flexible, prioritize, and be patient. It’s all about patience when you’re waiting for stuff to age four to 10 years.” — BRIAN MCKENZIE