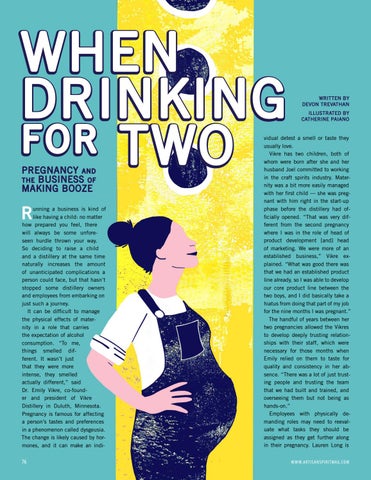 unning a business is kind of like having a child: no matter how prepared you feel, there will always be some unforeseen hurdle thrown your way. So deciding to raise a child and a distillery at the same time naturally increases the amount of unanticipated complications a person could face, but that hasn’t stopped some distillery owners and employees from embarking on just such a journey. It can be difficult to manage the physical effects of maternity in a role that carries the expectation of alcohol consumption. “To me, things smelled different. It wasn’t just that they were more intense, they smelled actually different,” said Dr. Emily Vikre, co-founder and president of Vikre Distillery in Duluth, Minnesota. Pregnancy is famous for affecting a person’s tastes and preferences in a phenomenon called dysgeusia. The change is likely caused by hormones, and it can make an indi-

vidual detest a smell or taste they usually love. Vikre has two children, both of whom were born after she and her husband Joel committed to working in the craft spirits industry. Maternity was a bit more easily managed with her first child — she was pregnant with him right in the start-up phase before the distillery had officially opened. “That was very different from the second pregnancy where I was in the role of head of product development [and] head of marketing. We were more of an established business,” Vikre explained. “What was good there was that we had an established product line already, so I was able to develop our core product line between the two boys, and I did basically take a hiatus from doing that part of my job for the nine months I was pregnant.” The handful of years between her two pregnancies allowed the Vikres to develop deeply trusting relationships with their staff, which were necessary for those months when Emily relied on them to taste for quality and consistency in her absence. “There was a lot of just trusting people and trusting the team that we had built and trained, and overseeing them but not being as hands-on.” Employees with physically demanding roles may need to reevaluate what tasks they should be assigned as they get further along in their pregnancy. Lauren Long is WWW.ART ISANSPI RI TMAG.CO M