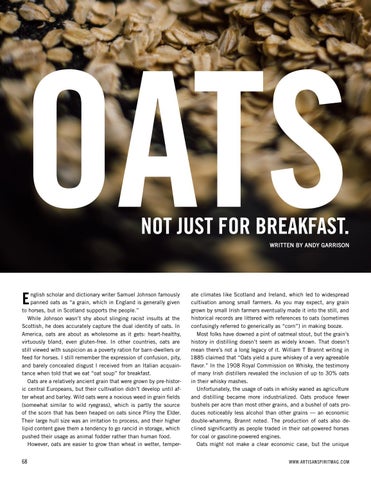 NOT JUST FOR BREAKFAST. WRITTEN BY ANDY GARRISON

nglish scholar and dictionary writer Samuel Johnson famously panned oats as “a grain, which in England is generally given to horses, but in Scotland supports the people.” While Johnson wasn’t shy about slinging racist insults at the Scottish, he does accurately capture the dual identity of oats. In America, oats are about as wholesome as it gets: heart-healthy, virtuously bland, even gluten-free. In other countries, oats are still viewed with suspicion as a poverty ration for barn-dwellers or feed for horses. I still remember the expression of confusion, pity, and barely concealed disgust I received from an Italian acquaintance when told that we eat “oat soup” for breakfast. Oats are a relatively ancient grain that were grown by pre-historic central Europeans, but their cultivation didn’t develop until after wheat and barley. Wild oats were a noxious weed in grain fields (somewhat similar to wild ryegrass), which is partly the source of the scorn that has been heaped on oats since Pliny the Elder. Their large hull size was an irritation to process, and their higher lipid content gave them a tendency to go rancid in storage, which pushed their usage as animal fodder rather than human food. However, oats are easier to grow than wheat in wetter, temper-

ate climates like Scotland and Ireland, which led to widespread cultivation among small farmers. As you may expect, any grain grown by small Irish farmers eventually made it into the still, and historical records are littered with references to oats (sometimes confusingly referred to generically as “corn”) in making booze. Most folks have downed a pint of oatmeal stout, but the grain’s history in distilling doesn’t seem as widely known. That doesn’t mean there’s not a long legacy of it. William T Brannt writing in 1885 claimed that “Oats yield a pure whiskey of a very agreeable flavor.” In the 1908 Royal Commission on Whisky, the testimony of many Irish distillers revealed the inclusion of up to 30% oats in their whisky mashes. Unfortunately, the usage of oats in whisky waned as agriculture and distilling became more industrialized. Oats produce fewer bushels per acre than most other grains, and a bushel of oats produces noticeably less alcohol than other grains — an economic double-whammy, Brannt noted. The production of oats also declined significantly as people traded in their oat-powered horses for coal or gasoline-powered engines. Oats might not make a clear economic case, but the unique WWW.ARTISANSPIRITMAG.COM