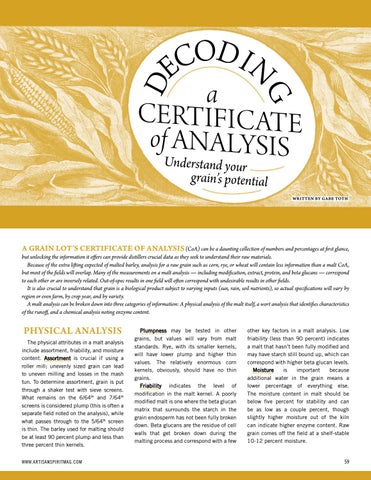 a CERTIFICATE of ANALYSIS Understand y our grain’s potential

A GRAIN LOT’S CERTIFICATE OF ANALYSIS (CoA) can be a daunting collection of numbers and percentages at first glance, but unlocking the information it offers can provide distillers crucial data as they seek to understand their raw materials. Because of the extra lifting expected of malted barley, analysis for a raw grain such as corn, rye, or wheat will contain less information than a malt CoA, but most of the fields will overlap. Many of the measurements on a malt analysis — including modification, extract, protein, and beta glucans — correspond to each other or are inversely related. Out-of-spec results in one field will often correspond with undesirable results in other fields. It is also crucial to understand that grain is a biological product subject to varying inputs (sun, rain, soil nutrients), so actual specifications will vary by region or even farm, by crop year, and by variety. A malt analysis can be broken down into three categories of information: A physical analysis of the malt itself, a wort analysis that identifies characteristics of the runoff, and a chemical analysis noting enzyme content.

PHYSICAL ANALYSIS The physical attributes in a malt analysis include assortment, friability, and moisture content. Assortment is crucial if using a roller mill; unevenly sized grain can lead to uneven milling and losses in the mash tun. To determine assortment, grain is put through a shaker test with sieve screens. What remains on the 6/64th and 7/64th screens is considered plump (this is often a separate field noted on the analysis), while what passes through to the 5/64th screen is thin. The barley used for malting should be at least 90 percent plump and less than three percent thin kernels. WWW.ARTISANSPIRITMAG.COM

Plumpness may be tested in other grains, but values will vary from malt standards. Rye, with its smaller kernels, will have lower plump and higher thin values. The relatively enormous corn kernels, obviously, should have no thin grains. Friability indicates the level of modification in the malt kernel. A poorly modified malt is one where the beta glucan matrix that surrounds the starch in the grain endosperm has not been fully broken down. Beta glucans are the residue of cell walls that get broken down during the malting process and correspond with a few

other key factors in a malt analysis. Low friability (less than 90 percent) indicates a malt that hasn’t been fully modified and may have starch still bound up, which can correspond with higher beta glucan levels. Moisture is important because additional water in the grain means a lower percentage of everything else. The moisture content in malt should be below five percent for stability and can be as low as a couple percent, though slightly higher moisture out of the kiln can indicate higher enzyme content. Raw grain comes off the field at a shelf-stable 10-12 percent moisture.