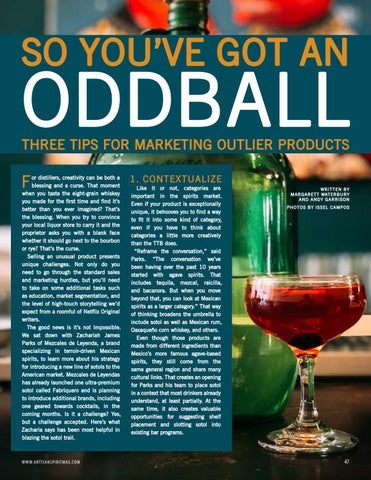 SO YOU’VE GOT AN

or distillers, creativity can be both a blessing and a curse. That moment when you taste the eight-grain whiskey you made for the first time and find it’s better than you ever imagined? That’s the blessing. When you try to convince your local liquor store to carry it and the proprietor asks you with a blank face whether it should go next to the bourbon or rye? That’s the curse. Selling an unusual product presents unique challenges. Not only do you need to go through the standard sales and marketing hurdles, but you’ll need to take on some additional tasks such as education, market segmentation, and the level of high-touch storytelling we’d expect from a roomful of Netflix Original writers. The good news is it’s not impossible. We sat down with Zachariah James Parks of Mezcales de Leyenda, a brand specializing in terroir-driven Mexican spirits, to learn more about his strategy for introducing a new line of sotols to the American market. Mezcales de Leyendas has already launched one ultra-premium sotol called Fabriquero and is planning to introduce additional brands, including one geared towards cocktails, in the coming months. Is it a challenge? Yes, but a challenge accepted. Here’s what Zacharia says has been most helpful in blazing the sotol trail.

1. CONTEXTUALIZE Like it or not, categories are important in the spirits market. Even if your product is exceptionally unique, it behooves you to find a way to fit it into some kind of category, even if you have to think about categories a little more creatively than the TTB does. “Reframe the conversation,” said Parks. “The conversation we’ve been having over the past 10 years started with agave spirits. That includes tequila, mezcal, raicilla, and bacanora. But when you move beyond that, you can look at Mexican spirits as a larger category.” That way of thinking broadens the umbrella to include sotol as well as Mexican rum, Oaxaqueño corn whiskey, and others. Even though those products are made from different ingredients than Mexico’s more famous agave-based spirits, they still come from the same general region and share many cultural links. That creates an opening for Parks and his team to place sotol in a context that most drinkers already understand, at least partially. At the same time, it also creates valuable opportunities for suggesting shelf placement and slotting sotol into existing bar programs.