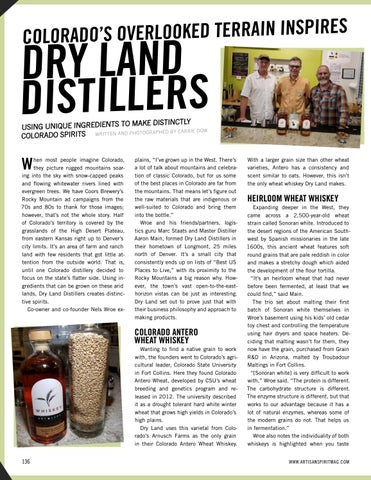 hen most people imagine Colorado, they picture rugged mountains soaring into the sky with snow-capped peaks and flowing whitewater rivers lined with evergreen trees. We have Coors Brewery’s Rocky Mountain ad campaigns from the 70s and 80s to thank for those images; however, that’s not the whole story. Half of Colorado’s territory is covered by the grasslands of the High Desert Plateau, from eastern Kansas right up to Denver’s city limits. It’s an area of farm and ranch land with few residents that got little attention from the outside world. That is, until one Colorado distillery decided to focus on the state’s flatter side. Using ingredients that can be grown on these arid lands, Dry Land Distillers creates distinctive spirits. Co-owner and co-founder Nels Wroe ex-

plains, “I’ve grown up in the West. There’s a lot of talk about mountains and celebration of classic Colorado, but for us some of the best places in Colorado are far from the mountains. That means let’s figure out the raw materials that are indigenous or well-suited to Colorado and bring them into the bottle.” Wroe and his friends/partners, logistics guru Marc Staats and Master Distiller Aaron Main, formed Dry Land Distillers in their hometown of Longmont, 25 miles north of Denver. It’s a small city that consistently ends up on lists of “Best US Places to Live,” with its proximity to the Rocky Mountains a big reason why. However, the town’s vast open-to-the-easthorizon vistas can be just as interesting. Dry Land set out to prove just that with their business philosophy and approach to making products.

COLORADO ANTERO WHEAT WHISKEY Wanting to find a native grain to work with, the founders went to Colorado’s agricultural leader, Colorado State University in Fort Collins. Here they found Colorado Antero Wheat, developed by CSU’s wheat breeding and genetics program and released in 2012. The university described it as a drought tolerant hard white winter wheat that grows high yields in Colorado’s high plains. Dry Land uses this varietal from Colorado’s Arnusch Farms as the only grain in their Colorado Antero Wheat Whiskey.

With a larger grain size than other wheat varieties, Antero has a consistency and scent similar to oats. However, this isn’t the only wheat whiskey Dry Land makes.

HEIRLOOM WHEAT WHISKEY Expanding deeper in the West, they came across a 2,500-year-old wheat strain called Sonoran white. Introduced to the desert regions of the American Southwest by Spanish missionaries in the late 1600s, this ancient wheat features soft round grains that are pale reddish in color and makes a stretchy dough which aided the development of the flour tortilla. “It’s an heirloom wheat that had never before been fermented, at least that we could find,” said Main. The trio set about malting their first batch of Sonoran white themselves in Wroe’s basement using his kids’ old cedar toy chest and controlling the temperature using hair dryers and space heaters. Deciding that malting wasn’t for them, they now have the grain, purchased from Grain R&amp;D in Arizona, malted by Troubadour Maltings in Fort Collins. “[Sonoran white] is very difficult to work with,” Wroe said. “The protein is different. The carbohydrate structure is different. The enzyme structure is different, but that works to our advantage because it has a lot of natural enzymes, whereas some of the modern grains do not. That helps us in fermentation.” Wroe also notes the individuality of both whiskeys is highlighted when you taste WWW.ARTISANSPIRITMAG.COM