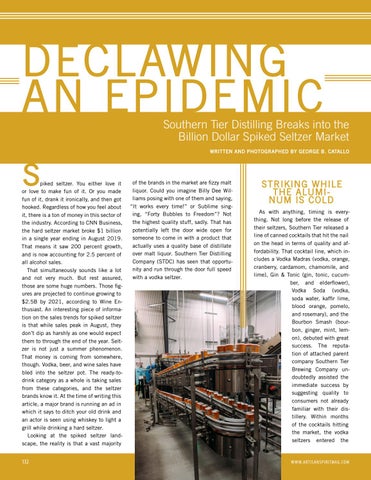 piked seltzer. You either love it or love to make fun of it. Or you made fun of it, drank it ironically, and then got hooked. Regardless of how you feel about it, there is a ton of money in this sector of the industry. According to CNN Business, the hard seltzer market broke $1 billion in a single year ending in August 2019. That means it saw 200 percent growth, and is now accounting for 2.5 percent of all alcohol sales. That simultaneously sounds like a lot and not very much. But rest assured, those are some huge numbers. Those figures are projected to continue growing to $2.5B by 2021, according to Wine Enthusiast. An interesting piece of information on the sales trends for spiked seltzer is that while sales peak in August, they don’t dip as harshly as one would expect them to through the end of the year. Seltzer is not just a summer phenomenon. That money is coming from somewhere, though. Vodka, beer, and wine sales have bled into the seltzer pot. The ready-todrink category as a whole is taking sales from these categories, and the seltzer brands know it. At the time of writing this article, a major brand is running an ad in which it says to ditch your old drink and an actor is seen using whiskey to light a grill while drinking a hard seltzer. Looking at the spiked seltzer landscape, the reality is that a vast majority

of the brands in the market are fizzy malt liquor. Could you imagine Billy Dee Williams posing with one of them and saying, “It works every time!” or Sublime singing, “Forty Bubbles to Freedom”? Not the highest quality stuff, sadly. That has potentially left the door wide open for someone to come in with a product that actually uses a quality base of distillate over malt liquor. Southern Tier Distilling Company (STDC) has seen that opportunity and run through the door full speed with a vodka seltzer.

STRIKING WHILE THE ALUMINUM IS COLD As with anything, timing is everything. Not long before the release of their seltzers, Southern Tier released a line of canned cocktails that hit the nail on the head in terms of quality and affordability. That cocktail line, which includes a Vodka Madras (vodka, orange, cranberry, cardamom, chamomile, and lime), Gin & Tonic (gin, tonic, cucumber, and elderflower), Vodka Soda (vodka, soda water, kaffir lime, blood orange, pomelo, and rosemary), and the Bourbon Smash (bourbon, ginger, mint, lemon), debuted with great success. The reputation of attached parent company Southern Tier Brewing Company undoubtedly assisted the immediate success by suggesting quality to consumers not already familiar with their distillery. Within months of the cocktails hitting the market, the vodka seltzers entered the