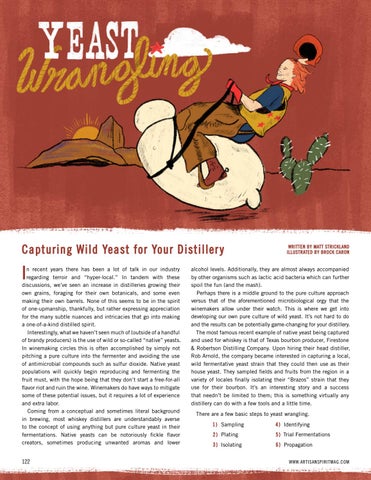 n recent years there has been a lot of talk in our industry regarding terroir and “hyper-local.” In tandem with these discussions, we’ve seen an increase in distilleries growing their own grains, foraging for their own botanicals, and some even making their own barrels. None of this seems to be in the spirit of one-upmanship, thankfully, but rather expressing appreciation for the many subtle nuances and intricacies that go into making a one-of-a-kind distilled spirit. Interestingly, what we haven’t seen much of (outside of a handful of brandy producers) is the use of wild or so-called “native” yeasts. In winemaking circles this is often accomplished by simply not pitching a pure culture into the fermenter and avoiding the use of antimicrobial compounds such as sulfur dioxide. Native yeast populations will quickly begin reproducing and fermenting the fruit must, with the hope being that they don’t start a free-for-all flavor riot and ruin the wine. Winemakers do have ways to mitigate some of these potential issues, but it requires a lot of experience and extra labor. Coming from a conceptual and sometimes literal background in brewing, most whiskey distillers are understandably averse to the concept of using anything but pure culture yeast in their fermentations. Native yeasts can be notoriously fickle flavor creators, sometimes producing unwanted aromas and lower

alcohol levels. Additionally, they are almost always accompanied by other organisms such as lactic acid bacteria which can further spoil the fun (and the mash). Perhaps there is a middle ground to the pure culture approach versus that of the aforementioned microbiological orgy that the winemakers allow under their watch. This is where we get into developing our own pure culture of wild yeast. It’s not hard to do and the results can be potentially game-changing for your distillery. The most famous recent example of native yeast being captured and used for whiskey is that of Texas bourbon producer, Firestone &amp; Robertson Distilling Company. Upon hiring their head distiller, Rob Arnold, the company became interested in capturing a local, wild fermentative yeast strain that they could then use as their house yeast. They sampled fields and fruits from the region in a variety of locales finally isolating their “Brazos” strain that they use for their bourbon. It’s an interesting story and a success that needn’t be limited to them; this is something virtually any distillery can do with a few tools and a little time. There are a few basic steps to yeast wrangling. 1 ) Sampling