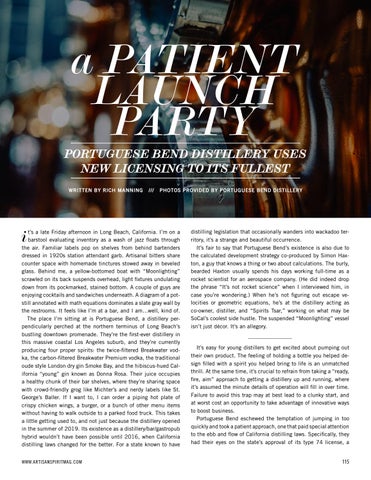 t’s a late Friday afternoon in Long Beach, California. I’m on a barstool evaluating inventory as a wash of jazz floats through the air. Familiar labels pop on shelves from behind bartenders dressed in 1920s station attendant garb. Artisanal bitters share counter space with homemade tinctures stowed away in beveled glass. Behind me, a yellow-bottomed boat with “Moonlighting” scrawled on its back suspends overhead, light fixtures undulating down from its pockmarked, stained bottom. A couple of guys are enjoying cocktails and sandwiches underneath. A diagram of a potstill annotated with math equations dominates a slate gray wall by the restrooms. It feels like I’m at a bar, and I am…well, kind of. The place I’m sitting at is Portuguese Bend, a distillery perpendicularly perched at the northern terminus of Long Beach’s bustling downtown promenade. They’re the first-ever distillery in this massive coastal Los Angeles suburb, and they’re currently producing four proper spirits: the twice-filtered Breakwater vodka, the carbon-filtered Breakwater Premium vodka, the traditional oude style London dry gin Smoke Bay, and the hibiscus-hued California “young” gin known as Donna Rosa. Their juice occupies a healthy chunk of their bar shelves, where they’re sharing space with crowd-friendly grog like Michter’s and nerdy labels like St. George’s Baller. If I want to, I can order a piping hot plate of crispy chicken wings, a burger, or a bunch of other menu items without having to walk outside to a parked food truck. This takes a little getting used to, and not just because the distillery opened in the summer of 2019. Its existence as a distillery/bar/gastropub hybrid wouldn’t have been possible until 2016, when California distilling laws changed for the better. For a state known to have WWW.ARTISANSPIRITMAG.COM

distilling legislation that occasionally wanders into wackadoo territory, it’s a strange and beautiful occurrence. It’s fair to say that Portuguese Bend’s existence is also due to the calculated development strategy co-produced by Simon Haxton, a guy that knows a thing or two about calculations. The burly, bearded Haxton usually spends his days working full-time as a rocket scientist for an aerospace company. (He did indeed drop the phrase “It’s not rocket science” when I interviewed him, in case you’re wondering.) When he’s not figuring out escape velocities or geometric equations, he’s at the distillery acting as co-owner, distiller, and “Spirits Tsar,” working on what may be SoCal’s coolest side hustle. The suspended “Moonlighting” vessel isn’t just décor. It’s an allegory.

It’s easy for young distillers to get excited about pumping out their own product. The feeling of holding a bottle you helped design filled with a spirit you helped bring to life is an unmatched thrill. At the same time, it’s crucial to refrain from taking a “ready, fire, aim” approach to getting a distillery up and running, where it’s assumed the minute details of operation will fill in over time. Failure to avoid this trap may at best lead to a clunky start, and at worst cost an opportunity to take advantage of innovative ways to boost business. Portuguese Bend eschewed the temptation of jumping in too quickly and took a patient approach, one that paid special attention to the ebb and flow of California distilling laws. Specifically, they had their eyes on the state’s approval of its type 74 license, a