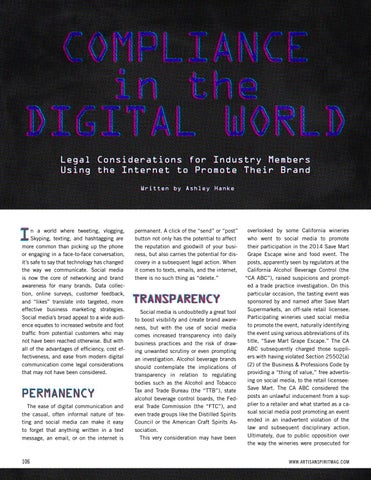 n a world where tweeting, vlogging, Skyping, texting, and hashtagging are more common than picking up the phone or engaging in a face-to-face conversation, it’s safe to say that technology has changed the way we communicate. Social media is now the core of networking and brand awareness for many brands. Data collection, online surveys, customer feedback, and “likes” translate into targeted, more effective business marketing strategies. Social media’s broad appeal to a wide audience equates to increased website and foot traffic from potential customers who may not have been reached otherwise. But with all of the advantages of efficiency, cost effectiveness, and ease from modern digital communication come legal considerations that may not have been considered.

PERMANENCY The ease of digital communication and the casual, often informal nature of texting and social media can make it easy to forget that anything written in a text message, an email, or on the internet is

permanent. A click of the “send” or “post” button not only has the potential to affect the reputation and goodwill of your business, but also carries the potential for discovery in a subsequent legal action. When it comes to texts, emails, and the internet, there is no such thing as “delete.”

TRANSPARENCY TRANSPARENCY Social media is undoubtedly a great tool to boost visibility and create brand awareness, but with the use of social media comes increased transparency into daily business practices and the risk of drawing unwanted scrutiny or even prompting an investigation. Alcohol beverage brands should contemplate the implications of transparency in relation to regulating bodies such as the Alcohol and Tobacco Tax and Trade Bureau (the “TTB”), state alcohol beverage control boards, the Federal Trade Commission (the “FTC”), and even trade groups like the Distilled Spirits Council or the American Craft Spirits Association. This very consideration may have been

overlooked by some California wineries who went to social media to promote their participation in the 2014 Save Mart Grape Escape wine and food event. The posts, apparently seen by regulators at the California Alcohol Beverage Control (the “CA ABC”), raised suspicions and prompted a trade practice investigation. On this particular occasion, the tasting event was sponsored by and named after Save Mart Supermarkets, an off-sale retail licensee. Participating wineries used social media to promote the event, naturally identifying the event using various abbreviations of its title, “Save Mart Grape Escape.” The CA ABC subsequently charged those suppliers with having violated Section 25502(a) (2) of the Business & Professions Code by providing a “thing of value,” free advertising on social media, to the retail licensee: Save Mart. The CA ABC considered the posts an unlawful inducement from a supplier to a retailer and what started as a casual social media post promoting an event ended in an inadvertent violation of the law and subsequent disciplinary action. Ultimately, due to public opposition over the way the wineries were prosecuted for WWW.ARTISANSPIRITMAG.COM