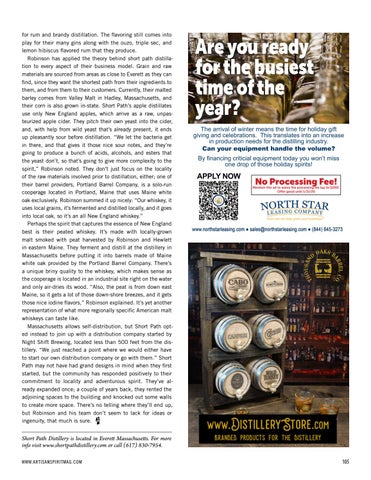 for rum and brandy distillation. The flavoring still comes into play for their many gins along with the ouzo, triple sec, and lemon hibiscus flavored rum that they produce. Robinson has applied the theory behind short path distillation to every aspect of their business model. Grain and raw materials are sourced from areas as close to Everett as they can find, since they want the shortest path from their ingredients to them, and from them to their customers. Currently, their malted barley comes from Valley Malt in Hadley, Massachusetts, and their corn is also grown in-state. Short Path’s apple distillates use only New England apples, which arrive as a raw, unpasteurized apple cider. They pitch their own yeast into the cider, and, with help from wild yeast that’s already present, it ends up pleasantly sour before distillation. “We let the bacteria get in there, and that gives it those nice sour notes, and they’re going to produce a bunch of acids, alcohols, and esters that the yeast don’t, so that’s going to give more complexity to the spirit,” Robinson noted. They don’t just focus on the locality of the raw materials involved prior to distillation, either; one of their barrel providers, Portland Barrel Company, is a solo-run cooperage located in Portland, Maine that uses Maine white oak exclusively. Robinson summed it up nicely: “Our whiskey, it uses local grains, it’s fermented and distilled locally, and it goes into local oak, so it’s an all New England whiskey.” Perhaps the spirit that captures the essence of New England best is their peated whiskey. It’s made with locally-grown malt smoked with peat harvested by Robinson and Hewlett in eastern Maine. They ferment and distill at the distillery in Massachusetts before putting it into barrels made of Maine white oak provided by the Portland Barrel Company. There’s a unique briny quality to the whiskey, which makes sense as the cooperage is located in an industrial site right on the water and only air-dries its wood. “Also, the peat is from down east Maine, so it gets a lot of those down-shore breezes, and it gets those nice iodine flavors,” Robinson explained. It’s yet another representation of what more regionally specific American malt whiskeys can taste like. Massachusetts allows self-distribution, but Short Path opted instead to join up with a distribution company started by Night Shift Brewing, located less than 500 feet from the distillery. “We just reached a point where we would either have to start our own distribution company or go with them.” Short Path may not have had grand designs in mind when they first started, but the community has responded positively to their commitment to locality and adventurous spirit. They’ve already expanded once; a couple of years back, they rented the adjoining spaces to the building and knocked out some walls to create more space. There’s no telling where they’ll end up, but Robinson and his team don’t seem to lack for ideas or ingenuity, that much is sure.

Are you ready for the busiest time of the year? The arrival of winter means the time for holiday gift giving and celebrations. This translates into an increase in production needs for the distilling industry. Can your equipment handle the volume? By financing criticial equipment today you won’t miss one drop of those holiday spirits!