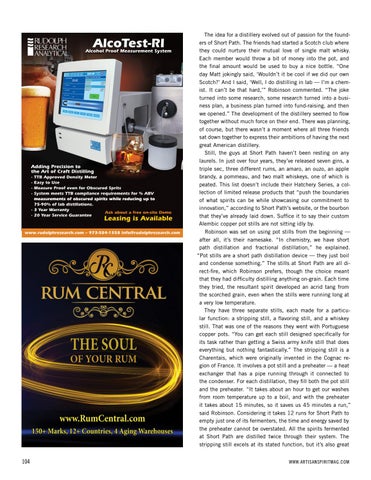 Adding Precision to the Art of Craft Distilling · · · ·

The idea for a distillery evolved out of passion for the founders of Short Path. The friends had started a Scotch club where they could nurture their mutual love of single malt whisky. Each member would throw a bit of money into the pot, and the final amount would be used to buy a nice bottle. “One day Matt jokingly said, ‘Wouldn’t it be cool if we did our own Scotch?’ And I said, ‘Well, I do distilling in lab — I’m a chemist. It can’t be that hard,’” Robinson commented. “The joke turned into some research, some research turned into a business plan, a business plan turned into fund-raising, and then we opened.” The development of the distillery seemed to flow together without much force on their end. There was planning, of course, but there wasn’t a moment where all three friends sat down together to express their ambitions of having the next great American distillery. Still, the guys at Short Path haven’t been resting on any laurels. In just over four years, they’ve released seven gins, a triple sec, three different rums, an amaro, an ouzo, an apple brandy, a pommeau, and two malt whiskeys, one of which is peated. This list doesn’t include their Hatchery Series, a collection of limited release products that “push the boundaries of what spirits can be while showcasing our commitment to innovation,” according to Short Path’s website, or the bourbon that they’ve already laid down. Suffice it to say their custom Alembic copper pot stills are not sitting idly by. Robinson was set on using pot stills from the beginning — after all, it’s their namesake. “In chemistry, we have short path distillation and fractional distillation,” he explained. “Pot stills are a short path distillation device — they just boil and condense something.” The stills at Short Path are all direct-fire, which Robinson prefers, though the choice meant that they had difficulty distilling anything on-grain. Each time they tried, the resultant spirit developed an acrid tang from the scorched grain, even when the stills were running long at a very low temperature. They have three separate stills, each made for a particular function: a stripping still, a flavoring still, and a whiskey still. That was one of the reasons they went with Portuguese copper pots. “You can get each still designed specifically for its task rather than getting a Swiss army knife still that does everything but nothing fantastically.” The stripping still is a Charentais, which were originally invented in the Cognac region of France. It involves a pot still and a preheater — a heat exchanger that has a pipe running through it connected to the condenser. For each distillation, they fill both the pot still and the preheater. “It takes about an hour to get our washes from room temperature up to a boil, and with the preheater it takes about 15 minutes, so it saves us 45 minutes a run,” said Robinson. Considering it takes 12 runs for Short Path to empty just one of its fermenters, the time and energy saved by the preheater cannot be overstated. All the spirits fermented at Short Path are distilled twice through their system. The stripping still excels at its stated function, but it’s also great WWW.ARTISANSPIRITMAG.COM