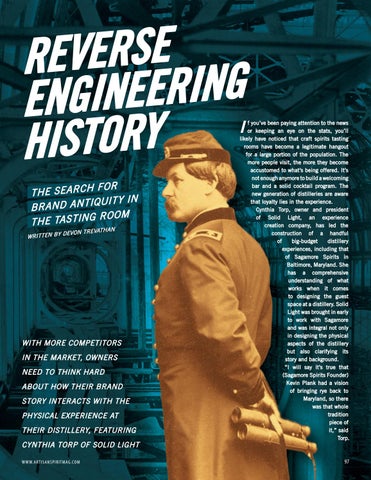 WITH MORE COMPETITORS IN THE MARKET, OWNERS NEED TO THINK HARD ABOUT HOW THEIR BRAND STORY INTERACTS WITH THE PHYSICAL EXPERIENCE AT THEIR DISTILLERY, FEATURING CYNTHIA TORP OF SOLID LIGHT WWW.ART ISANSP IRITMAG.COM

f you’ve been paying attention to the news or keeping an eye on the stats, you’ll likely have noticed that craft spirits tasting rooms have become a legitimate hangout for a large portion of the population. The more people visit, the more they become accustomed to what’s being offered. It’s not enough anymore to build a welcoming bar and a solid cocktail program. The new generation of distilleries are aware that loyalty lies in the experience. Cynthia Torp, owner and president of Solid Light, an experience creation company, has led the construction of a handful of big-budget distillery experiences, including that of Sagamore Spirits in Baltimore, Maryland. She has a comprehensive understanding of what works when it comes to designing the guest space at a distillery. Solid Light was brought in early to work with Sagamore and was integral not only in designing the physical aspects of the distillery but also clarifying its story and background. “I will say it’s true that (Sagamore Spirits Founder) Kevin Plank had a vision of bringing rye back to  Maryland, so there  was that whole tradition  piece of it,” said Torp.