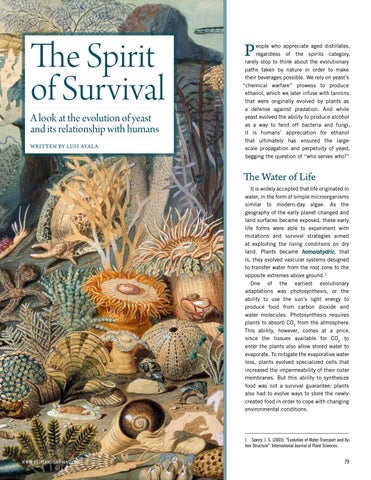 eople who appreciate aged distillates, regardless of the spirits category, rarely stop to think about the evolutionary paths taken by nature in order to make their beverages possible. We rely on yeast’s “chemical warfare” prowess to produce ethanol, which we later infuse with tannins that were originally evolved by plants as a defense against predation. And while yeast evolved the ability to produce alcohol as a way to fend off bacteria and fungi, it is humans’ appreciation for ethanol that ultimately has ensured the largescale propagation and perpetuity of yeast, begging the question of “who serves who?”

The Water of Life It is widely accepted that life originated in water, in the form of simple microorganisms similar to modern-day algae. As the geography of the early planet changed and land surfaces became exposed, these early life forms were able to experiment with mutations and survival strategies aimed at exploiting the living conditions on dry land. Plants became homoiohydric, that is, they evolved vascular systems designed to transfer water from the root zone to the opposite extremes above ground.1 One of the earliest evolutionary adaptations was photosynthesis, or the ability to use the sun’s light energy to produce food from carbon dioxide and water molecules. Photosynthesis requires plants to absorb CO2 from the atmosphere. This ability, however, comes at a price, since the tissues available for CO2 to enter the plants also allow stored water to evaporate. To mitigate the evaporative water loss, plants evolved specialized cells that increased the impermeability of their outer membranes. But this ability to synthesize food was not a survival guarantee: plants also had to evolve ways to store the newlycreated food in order to cope with changing environmental conditions.