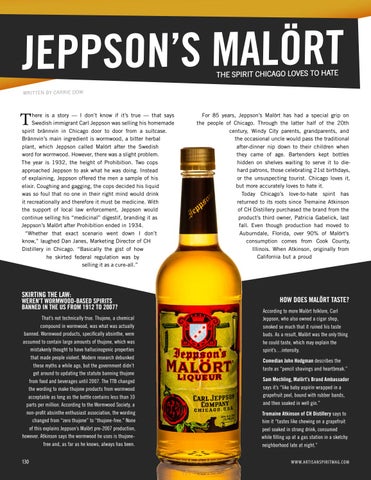 here is a story — I don’t know if it’s true — that says Swedish immigrant Carl Jeppson was selling his homemade spirit brännvin in Chicago door to door from a suitcase. Brännvin’s main ingredient is wormwood, a bitter herbal plant, which Jeppson called Malört after the Swedish word for wormwood. However, there was a slight problem. The year is 1932, the height of Prohibition. Two cops approached Jeppson to ask what he was doing. Instead of explaining, Jeppson offered the men a sample of his elixir. Coughing and gagging, the cops decided his liquid was so foul that no one in their right mind would drink it recreationally and therefore it must be medicine. With the support of local law enforcement, Jeppson would continue selling his “medicinal” digestif, branding it as Jeppson’s Malört after Prohibition ended in 1934. “Whether that exact scenario went down I don’t know,” laughed Dan Janes, Marketing Director of CH Distillery in Chicago. “Basically the gist of how he skirted federal regulation was by selling it as a cure-all.”

WEREN’T WORMWOOD-BASED SPIRITS BANNED IN THE US FROM 1912 TO 2007? That’s not technically true. Thujone, a chemical compound in wormwood, was what was actually banned. Wormwood products, specifically absinthe, were assumed to contain large amounts of thujone, which was mistakenly thought to have hallucinogenic properties that made people violent. Modern research debunked these myths a while ago, but the government didn’t get around to updating the statute banning thujone from food and beverages until 2007. The TTB changed the wording to make thujone products from wormwood acceptable as long as the bottle contains less than 10 parts per million. According to the Wormwood Society, a non-profit absinthe enthusiast association, the wording changed from “zero thujone” to “thujone-free.” None of this explains Jeppson’s Malört pre-2007 production, however. Atkinson says the wormwood he uses is thujonefree and, as far as he knows, always has been.

For 85 years, Jeppson’s Malört has had a special grip on the people of Chicago. Through the latter half of the 20th century, Windy City parents, grandparents, and the occasional uncle would pass the traditional after-dinner nip down to their children when they came of age. Bartenders kept bottles hidden on shelves waiting to serve it to diehard patrons, those celebrating 21st birthdays, or the unsuspecting tourist. Chicago loves it, but more accurately loves to hate it. Today Chicago’s love-to-hate spirit has returned to its roots since Tremaine Atkinson of CH Distillery purchased the brand from the product’s third owner, Patricia Gabelick, last fall. Even though production had moved to Auburndale, Florida, over 90% of Malört’s consumption comes from Cook County, Illinois. When Atkinson, originally from California but a proud

HOW DOES MALÖRT TASTE? According to more Malört folklore, Carl Jeppson, who also owned a cigar shop, smoked so much that it ruined his taste buds. As a result, Malört was the only thing he could taste, which may explain the spirit’s…intensity. Comedian John Hodgman describes the taste as “pencil shavings and heartbreak.” Sam Mechling, Malört’s Brand Ambassador says it’s “like baby aspirin wrapped in a grapefruit peel, bound with rubber bands, and then soaked in well gin.” Tremaine Atkinson of CH Distillery says to him it “tastes like chewing on a grapefruit peel soaked in strong drink, consumed while filling up at a gas station in a sketchy neighborhood late at night.” WWW.ART ISANSPI RI TMAG.CO M