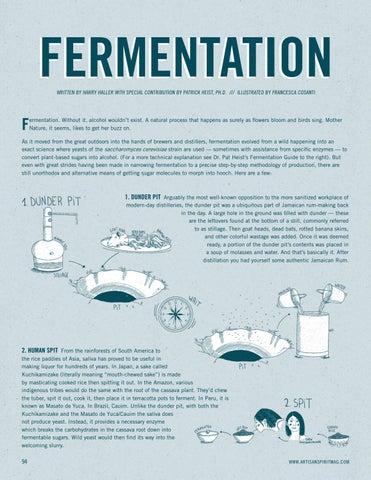 ermentation. Without it, alcohol wouldn’t exist. A natural process that happens as surely as flowers bloom and birds sing. Mother Nature, it seems, likes to get her buzz on.

As it moved from the great outdoors into the hands of brewers and distillers, fermentation evolved from a wild happening into an exact science where yeasts of the saccharomyces cerevisiae strain are used — sometimes with assistance from specific enzymes — to convert plant-based sugars into alcohol. (For a more technical explanation see Dr. Pat Heist’s Fermentation Guide to the right). But even with great strides having been made in narrowing fermentation to a precise step-by-step methodology of production, there are still unorthodox and alternative means of getting sugar molecules to morph into hooch. Here are a few:

1. DUNDER PIT Arguably the most well-known opposition to the more sanitized workplace of modern-day distilleries, the dunder pit was a ubiquitous part of Jamaican rum-making back in the day. A large hole in the ground was filled with dunder — these are the leftovers found at the bottom of a still, commonly referred to as stillage. Then goat heads, dead bats, rotted banana skins, and other colorful wastage was added. Once it was deemed ready, a portion of the dunder pit’s contents was placed in a soup of molasses and water. And that’s basically it. After distillation you had yourself some authentic Jamaican Rum.

2. HUMAN SPIT From the rainforests of South America to the rice paddies of Asia, saliva has proved to be useful in making liquor for hundreds of years. In Japan, a sake called Kuchikamizake (literally meaning “mouth-chewed sake”) is made by masticating cooked rice then spitting it out. In the Amazon, various indigenous tribes would do the same with the root of the cassava plant. They’d chew the tuber, spit it out, cook it, then place it in terracotta pots to ferment. In Peru, it is known as Masato de Yuca. In Brazil, Cauim. Unlike the dunder pit, with both the Kuchikamizake and the Masato de Yuca/Cauim the saliva does not produce yeast. Instead, it provides a necessary enzyme which breaks the carbohydrates in the cassava root down into fermentable sugars. Wild yeast would then find its way into the welcoming slurry. 94