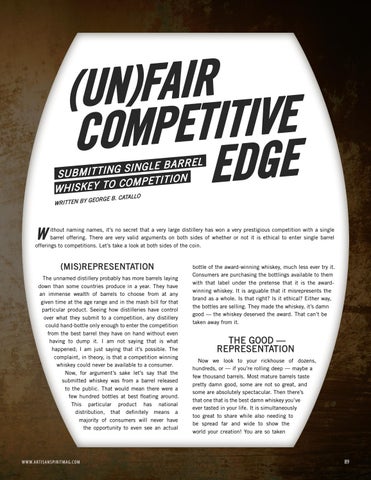 (MIS)REPRESENTATION The unnamed distillery probably has more barrels laying down than some countries produce in a year. They have an immense wealth of barrels to choose from at any given time at the age range and in the mash bill for that particular product. Seeing how distilleries have control over what they submit to a competition, any distillery could hand-bottle only enough to enter the competition from the best barrel they have on hand without even having to dump it. I am not saying that is what happened; I am just saying that it’s possible. The complaint, in theory, is that a competition winning whiskey could never be available to a consumer. Now, for argument’s sake let’s say that the submitted whiskey was from a barrel released to the public. That would mean there were a few hundred bottles at best floating around. This particular product has national distribution, that definitely means a majority of consumers will never have the opportunity to even see an actual

bottle of the award-winning whiskey, much less ever try it. Consumers are purchasing the bottlings available to them with that label under the pretense that it is the awardwinning whiskey. It is arguable that it misrepresents the brand as a whole. Is that right? Is it ethical? Either way, the bottles are selling. They made the whiskey, it’s damn good — the whiskey deserved the award. That can’t be taken away from it.

THE GOOD — REPRESENTATION Now we look to your rickhouse of dozens, hundreds, or — if you’re rolling deep — maybe a few thousand barrels. Most mature barrels taste pretty damn good, some are not so great, and some are absolutely spectacular. Then there’s that one that is the best damn whiskey you’ve ever tasted in your life. It is simultaneously too great to share while also needing to be spread far and wide to show the world your creation! You are so taken