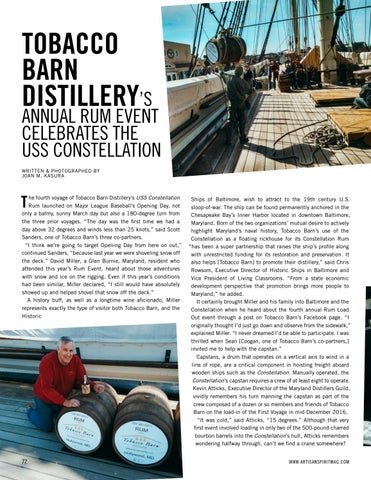 he fourth voyage of Tobacco Barn Distillery’s USS Constellation Rum launched on Major League Baseball’s Opening Day, not only a balmy, sunny March day but also a 180-degree turn from the three prior voyages. “The day was the first time we had a day above 32 degrees and winds less than 25 knots,” said Scott Sanders, one of Tobacco Barn’s three co-partners. “I think we’re going to target Opening Day from here on out,” continued Sanders, “because last year we were shoveling snow off the deck.” David Miller, a Glen Burnie, Maryland, resident who attended this year’s Rum Event, heard about those adventures with snow and ice on the rigging. Even if this year’s conditions had been similar, Miller declared, “I still would have absolutely showed up and helped shovel that snow off the deck.” A history buff, as well as a longtime wine aficionado, Miller represents exactly the type of visitor both Tobacco Barn, and the Historic

Ships of Baltimore, wish to attract to the 19th century U.S. sloop-of-war. The ship can be found permanently anchored in the Chesapeake Bay’s Inner Harbor located in downtown Baltimore, Maryland. Born of the two organizations’ mutual desire to actively highlight Maryland’s naval history, Tobacco Barn’s use of the Constellation as a floating rickhouse for its Constellation Rum “has been a super partnership that raises the ship’s profile along with unrestricted funding for its restoration and preservation. It also helps [Tobacco Barn] to promote their distillery,” said Chris Rowsom, Executive Director of Historic Ships in Baltimore and Vice President of Living Classrooms. “From a state economic development perspective that promotion brings more people to Maryland,” he added. It certainly brought Miller and his family into Baltimore and the Constellation when he heard about the fourth annual Rum Load Out event through a post on Tobacco Barn’s Facebook page. “I originally thought I’d just go down and observe from the sidewalk,” explained Miller. “I never dreamed I’d be able to participate. I was thrilled when Sean [Coogan, one of Tobacco Barn’s co-partners,] invited me to help with the capstan.” Capstans, a drum that operates on a vertical axis to wind in a line of rope, are a critical component in hoisting freight aboard wooden ships such as the Constellation. Manually operated, the Constellation ’s capstan requires a crew of at least eight to operate. Kevin Atticks, Executive Director of the Maryland Distillers Guild, vividly remembers his turn manning the capstan as part of the crew composed of a dozen or so members and friends of Tobacco Barn on the load-in of the First Voyage in mid-December 2016. “It was cold,” said Atticks, “15 degrees.” Although that very first event involved loading in only two of the 500-pound charred bourbon barrels into the Constellation’s hull, Atticks remembers wondering halfway through, can’t we find a crane somewhere? WWW.ARTISANSPIRITMAG.COM